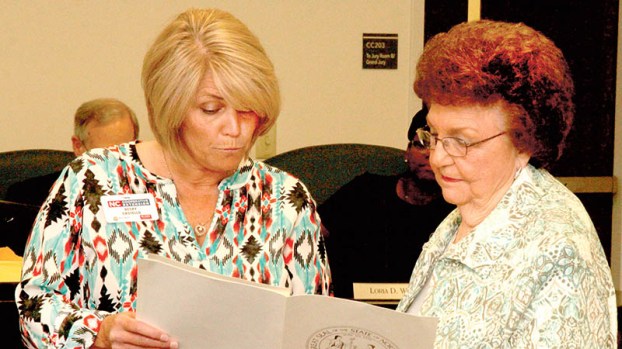 Carolyn Brinkley (right) listens as Becky Castello reads from a certificate that honored Brinkley as the winner of the 2018 Governor’s Award for Volunteer Service in Hertford County.

WINTON – There are two certainties in life – death and taxes.

For 45 years, Carolyn Early Brinkley made the latter a lot less painless than the first during her seasonal job as a “list taker” for the Hertford County Tax Assessor’s Office.

On Monday, Brinkley was recognized as the Hertford County recipient of the 2018 Governor’s Award for Volunteer Service. That honor came for her volunteer work at Vidant Roanoke-Chowan Hospital, the Ahoskie Women’s Club, and Early’s Baptist Church.

Becky Castello, administrative assistant for Hertford County Cooperative Extension who also serves as the local liaison for the Governor’s Volunteer Awards, made the presentation during the regularly scheduled meeting of the Hertford County Board of Commissioners.

“Mrs. Brinkley has worked tirelessly and effortlessly to improve our county,” Castello remarked. “She has gone far above and beyond the call of duty. Now that she’s retired she’s doing even more. The extent of what she has done over the course of her lifetime is endless. Most people when they retire, they retire; but not Carolyn Brinkley as she continues to serve.”

Brinkley was given a standing ovation from those assembled at Monday’s meeting. She also received accolades from those in the audience.

“I have a special place in my heart for Miss Carolyn,” said Sylvia Anderson, Hertford County’s Tax Assessor. “She worked as a county list taker for over 45 years. She taught me a lot; I learned so much from her.”

In a later interview, Anderson said Brinkley was a seasonal employee in the Assessor’s Office, working annually from January until late April before ending that 45-year job in 2014.

“I remember the first couple of years after Miss Carolyn retired that we had people that didn’t want to list their taxes because she was no longer here,” Anderson shared. “She had so much patience and understanding. Her demeanor was so calm that people would ask for her by name. They felt comfortable talking with her and she always strived to do her very best.”

“I thank you Mrs. Brinkley for all you have done for Hertford County,” said Curtis Freeman, chairman of the Board of Commissioners, at Monday’s meeting. “In this day when it seems that no one cares, no one wants to help, you are a walking, living example of a volunteer. You set the standard for other citizens to follow.”

“I too appreciate the service Mrs. Brinkley has provided to our county and her community,” stated Commissioner Johnnie Ray Farmer. “Since I’ve been on this board, every year at tax listing time and I walked into the tax office, Mrs. Brinkley was there, along with the other ladies, doing her usual great job. Mrs. Brinkley, you’re like a Timex, you just keep on ticking.”

Farmer, taking a personal approach, told of the bond his family had with the Brinkleys, especially her son, Doug.

“Years back when Doug was working with the county and my dad was a county commissioner, who in his last years was failing in health, Doug would come to the house and pick him up and bring him to the commissioners’ meeting and then take him home,” Farmer recalled. “My family appreciated that so much. My dad had so much love and respect for the Brinkley family.

“Doug, like an apple, didn’t fall far from the tree because just like his mother and father, he has been a good citizen of this county,” Farmer added.

Commissioner Ronald Gatling also had a personal comment about his association with the Brinkley family.

“I’ve known the Early, Myers, Brinkley family all my life,” he stressed. “They are a family of service. While we recognize Mrs. Brinkley here today, there are so many from this family so deserving of recognition. They have been valuable to the town of Ahoskie and all of Hertford County.”

Commissioner John Horton quoted biblical scripture when praising Mrs. Brinkley for her volunteerism – “May the words that you lift up speak for you.”

“She is a wonderful asset to our church,” stated Dr. Croom. “She does so many things, not for recognition; rather that’s her calling in life and we’re so grateful for her.”

Brinkley’s daughter-in-law, Susan, said, “She sets a high standard as our role model. It’s very hard for us to keep up with her pace. We’re so proud of her and we love her dearly.”

Humbled by the honor bestowed by the Governor, Mrs. Brinkley stated she enjoyed the 45 years she spent in the Hertford County Tax Office.

“I never had anyone to be ugly with me,” she recalled of her long period of service to the county. “They (taxpayers) have cried with me, they’re laughed with me, and I wish I could still be there, but I figured after all those years it was time to go home and do some volunteer work. I thank you for this honor; it means a lot to me. As long as I can stay on these two feet I will continue to volunteer.”

Her work is not limited to the county and her church as Brinkley is a longtime dedicated member of the Vidant Roanoke-Chowan Hospital Volunteer Program and in various other civic organizations in Ahoskie.

According to information posted on the hospital’s Facebook page, Mrs. Brinkley became a member of the R-CH volunteer group in 1974. During the past 42 years, she has served in various roles, including patient advocacy and greeting in the emergency department, the intensive care unit, and the gift shop.

She became a founding member of the hospital auxiliary board in 1982 and served as its president until 1986. She continues to actively participate as an auxiliary board member as the chairperson for bylaws and constitution. She also served as the co-chair for the 60th Anniversary Hospital Ball in 2008.

Her association with the local hospital dates back to her grandfather, James David Early, who had a vision for a hospital to be built in Ahoskie and a promise to donate the land for it to happen. Her grandfather’s wishes were honored when her father, James Bertram Early, Sr., donated the land in 1944 that would be the site that Roanoke-Chowan Hospital was originally built on in 1948. Her mother, Sybil, volunteered for over 20 years in the original hospital and Carolyn, when she was a teenager, accompanied her mother on many occasions, setting the foundation for a lifetime of service to the community in which she grew up and continues to live to this day.

In the community, Carolyn Brinkley is a 47-year member of the Ahoskie Women’s Club. There she is actively involved in local, state, and international human interest projects, including public affairs, home life issues, education, arts, conservation, and community improvement. She twice served as club president (1983-85; and 1994-96); held the position of Vice President for the District Woman’s Club; and was honored as the club’s Woman of the Year on two separate occasions: 1986 and 2011.

At Early’s Baptist, Brinkley has taught Sunday School for 65 years; is a 43-year member of the church choir; and has served as the Church Clerk for the past 32 years. She has been a member of the Women’s Missionary Union since 1951, serving as its secretary/treasurer since 1963. Additionally, she prepares meals for church Family Mission Night.

Married to Robert Earl Brinkley for 66 years, she is the mother of three sons; and has seven grandchildren and four great-grandchildren.