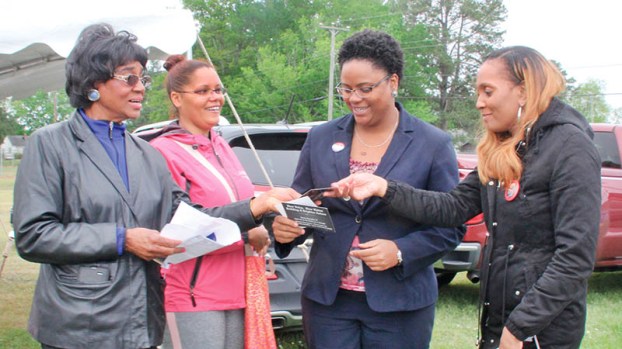 Poll workers at the Ahoskie 2 Precinct hand out campaign literature during Tuesday’s Primary election. Voter turnout in Hertford County was less than 30 percent as only 4,539 of the county’s 15,340 registered voters cast ballots in this election cycle. | Staff Photo by Cal Bryant

Leroy Douglas II is now the exception to that rule.

Riding a huge advantage in One-Stop voting, Douglas earned the Democratic nomination by defeating three other candidates vying for the District 1 seat on the Hertford County Board of Commissioners.

Meanwhile, Curtis Freeman, a 20-year member of the county commissioners, lost his bid for an opportunity at another term in his race against Andre Lassiter, a local businessman and member of the Roanoke-Chowan Community College Board of Trustees.

For Douglas, his seemingly impossible feat was accomplished in the days leading up to May 8. It was during the 14-day One-Stop cycle where Douglas tallied nearly one-half of his vote total. He topped the overall ballot with 1,524 votes, of which 715 came in advance of May 8.

On the actual day of the election, Douglas, a local businessman, was the leading vote-getter in only two of the county’s 13 precincts (Ahoskie 3 and St. John).

The District 1 seat was open in this election cycle after longtime incumbent Johnnie Ray Farmer sought not to seek relection.

In the District 2 race, Lassiter came out on top by winning eight precincts on Election Day as well as holding a decisive edge (997-382) over Freeman in One-Stop voting.

Lassiter advances to November’s General Election to face Ahoskie Republican Donald Kirkland, who had no GOP challenger in the Primary.

In the race for Sheriff, Hayes handily earned the Democratic nomination by defeating Eason, 3,224 to 997.

Hayes advances to the General Election where he will face former Ahoskie Police Officer and ex-Ahoskie Mayor Brien Lassiter. He filed a petition to have his name listed on November’s ballot as an unaffiliated candidate. That process included meeting a requirement to have a certain percentage of the county’s registered voters to sign his petition. That petition has been validated and certified by the Hertford County Board of Elections.

The following are the unofficial results of Tuesday’s (May 8) Primary Election for Hertford County: Board of Commissioners (District 1)... read more