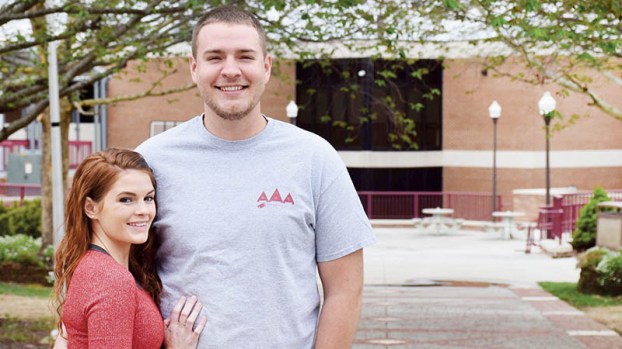 WYTHEVILLE, VA – Both life-long residents of the eastern North Carolina town of Ahoskie (town slogan: “The Only One”), neither of them had really planned to move away from their homes and their families.

Daniel and Brandi Feher, who met as children in their Sunday School class, were barely newlyweds when they were presented by his aunt with the prospect of living in the southwestern Virginia town of Wytheville (town slogan: “There’s Only One”) to help manage her property.

Moving somewhere new and different sounded like an exciting adventure for the young couple, but what would they do there? What about jobs and college and career plans?

Brandi was taking classes at a local college, but she wasn’t sure of her next steps. Daniel planned to go into the military like so many of his family members, but he wanted an engineering degree first. Would this small town nestled at a nexus of two major interstates in Southwest Virginia be able to provide them with the best opportunities for their future?

During his research about the area, Daniel found out about Wytheville Community College’s Science with a Specialization in Engineering Program, a two-year associate degree program that seamlessly transfers directly into Virginia Tech’s four-year engineering degree. Brandi realized she could easily take transferable credits at WCC, too. So right after they returned from their honeymoon, the couple packed up, moved to Wytheville, and enrolled in classes at WCC. And the community and the college embraced them as family.

A few years later, the couple who grew up together and embarked on a new adventure just days after their wedding are well on their way to pursuing their next goal as a family. Brandi completed an associate’s degree in General Studies with a specialization in Human Services in the summer of 2017. Daniel completed his associate degree in Science with a Specialization in Engineering in spring 2018 and will graduate on May 12.

During her time at WCC, Brandi was able to take classes full time and work full time at the Presbyterian Children’s Home in Wytheville, where she also completed an internship. An accomplished artist, Brandi entered and won the WCC Student Art Contest and donated her work back to the college. Although she works in all art media styles, including pottery and photography, she is particularly interested in drawing, acrylic, oil, watercolor, and chalk works, often mixing the media on canvas.

Although she studied and continues to work in the Human Services field, she plans eventually to pursue a bachelor’s degree in studio arts at Virginia Tech and is even considering combining her artist skills with her love for helping children by using art to teach students with special needs and anxiety issues.

“Everyone at WCC is really, really nice and helpful. Here you have real advisors who give real help,” Brandi remarked. “And I got to go to school with my husband,” which she views as an added bonus.

While at WCC, Daniel excelled in his program as well, earning many academic honors and scholarships, including the highly coveted “Valley Proteins Fellows Scholarship” from Virginia Foundation for Community College Education. This highly competitive scholarship is only awarded to 10 community college students from across the Commonwealth each year.

Through WCC’s transfer agreement with Virginia Tech’s engineering program, in the fall, Daniel will begin his bachelor’s degree program at Virginia Tech as an aerospace/ocean and mechanical engineering double major. He is also considering a master’s degree and ultimately plans to join the U.S. Navy as a Naval Surface Warfare Officer.

Both Daniel and Brandi credit their WCC professors with much of their own personal success.

“The best thing about WCC is the teachers. The teachers are fantastic,” said Daniel. “Mrs. Evans, Mr. Jones, Mr. Lachniet—they know their stuff.”

“And Mrs. Haga—she was great! She helped me through a lot,” added Brandi.

With both Brandi and Daniel attending college at the same time and with the intensity of Daniel’s engineering program, the couple only had one income during their time at WCC. However, with the help of financial aid and scholarships, neither has incurred any debt during their time at WCC, and both have graduated with associate’s degrees that put them exactly where they want to be, things for which they are both grateful.

Brandi and Daniel are just two of countless student success stories this year.

On May 12, WCC expects more than 334 graduates to participate during two ceremonies. The Class of 2018 includes 429 students who have earned 853 degrees, diplomas, and certificates, with many students earning more than one credential.

WCC will celebrate the graduation of its Class of 2018 during two commencement exercises. Graduates of the college’s Health and Occupational Programs will be recognized during the May 12 event at 2 p.m. During the second ceremony at 6:30 p.m., WCC will recognize graduates from WCC’s Transfer, Business, and Social Science Programs. Both commencement ceremonies will be held at the Wytheville Meeting Center adjacent to the WCC campus in Wytheville, VA.

(This story and photo are published with permission from Wytheville Community College.)