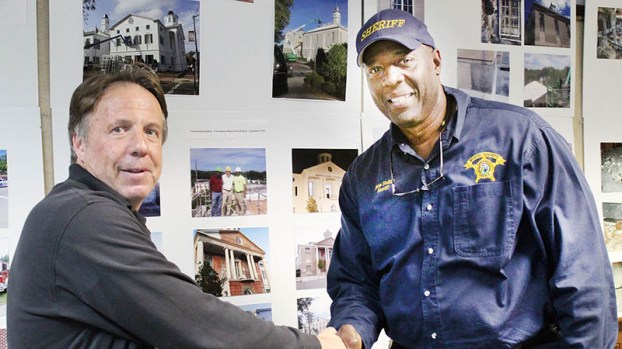 WINDSOR – With less than 30 percent of the county’s registered voters (28.54 percent, or 3,994 out of 13,993) participating, either by absentee ballot, one-stop voting, or at the polls on Tuesday, Bertie County voters re-elected Sheriff John Holley as well as incumbent County Commissioners Tammy Lee and Ernestine (Byrd) Bazemore.

Also elected in his first term for Commissioner was former Sheriff Greg Atkins, who won the Primary vote over challenger Michael Freeman to represent District-2.

All of the winners are Democrats and face no Republican opposition in November’s General Election.

The sheriff’s race had expected to be hotly contested in light of challenger Adrian Bowen having been ruled ineligible by the county’s Board of Elections during an April hearing.

Bowen, who filed for Bertie Sheriff in late February, was the subject of a candidate challenge brought by Bertie resident and registered voter Vivian Clarke who claimed that Bowen did not reside in Windsor, but rather in Elizabeth City. He lost that challenge, but appealed it to the State Elections Board.

Since the State Board did not hear Bowen’s appeal before the May 8 primary, his vote total will be set aside, and may become a moot point since Holley outpolled him 2,626 votes to 1,087.

At the County Commissioner’s Room in the County Administration Building in Windsor, Holley watched as the returns came in but did not declare victory until all 12 of the county’s precincts had reported.  He received at least 60 percent of the vote in every precinct reported, but he did not comment afterward on what some considered a bitter, contentious campaign.

“Of course I’m very happy,” Holley stated. “I remain humble and refused to allow myself to be pulled into all that drama. First, and foremost, I have to give honor and praises to God because his words remain true: ‘Though they slay me, I will stand’.”

In the only appearance where both candidates were present together, current District-3 Commissioner Tammy Lee of Colerain watched the returns come in seated only a few feet away in the room from challenger Corey Ballance, Sr. of Aulander.  In the end, Lee won seven of the one dozen precincts, while Balance outpolled her in Colerain-2 (Powellsville), and the far western precincts of Roxobel, Mitchells-2, Lewiston-Woodville, and Indian Woods. The vote tally had Lee winning 2,106 to 1,483

“I feel good,” a relieved Lee said afterward. “I’m ready to go to work and work another four years for the citizens of Bertie County. I thank them for their support; it was a lot of hard work, but now I look toward continuing my work in seeing Bertie move forward.”

“Someone had to win and someone had to lose,” said Ballance, with no remorse in his tone. “The citizens have spoken and they got who they wanted. We all have to honor that.”

Atkins, a Colerain native, who turned the sheriff’s reins over to Holley more than four years ago, was making a return to the political ring in a run for the District-2 seat after incumbent Stewart White opted not to seek a second term. Atkins outpolled challenger Michael Freeman of Merry Hill by over 450 votes, 2,060 to 1,604.  He arrived late to the Commissioner’s Room post-election celebration and was greeted as he entered by Lee and Holley.

“I’m just really grateful to the people of Bertie County for allowing me to serve them again,” Atkins said. “It’s been quite an ascent from Sheriff now to Commissioner and it’s a real honor. I’m just looking forward to being back there, and being in a position where I can help people. I also have to compliment my opponent; he ran a very clean race.”

Ernestine (Byrd) Bazemore kept a low profile on Primary night. The current Commissioner’s chairperson, and former educator, defeated political newcomer, farmer Carl Bond, by only 380 votes, 1,929 to 1,549, in the closest race of the night.

“I would like to thank the citizens of Bertie County for their support and vote of confidence,” Bazemore said in a post-election news statement. “Now that the election process is over, my vision for Bertie remains intact; let us continue to work together for the betterment of Bertie County (Together we Can) with an unremitting focus on the real issues. Let’s roll up our sleeves and work together for a better tomorrow. Again I thank you.”

Bertie voters also said no once again to the One Quarter Cent (1/4¢) County Sales and Use Tax during the primary vote with 2,569 votes against to 1,039 votes in favor.

“When the Board of Commissioners and the Board of Education met back in the winter we pledged to use these additional funds for teacher supplements,” said Bertie County Manager Scott Sauer. “Some supplement in teacher pay would certainly be a worthy objective and an outstanding recruiting incentive.”

Bertie voters could be getting a second chance to decide on increasing sales tax in the county by one-quarter of a penny should the Commissioners introduced a resolution calling for the county’s Board of Elections when it meets later this summer to place a vote on the tax back on the ballot in the Nov. 6 general election.

The following are the unofficial results of Tuesday’s (May 8) Primary Election in Bertie County: Board of Commissioners (District 2)... read more