The Falcons scored three runs in the first inning in the game played at historic Hicks Field which will help decide seeding in the upcoming 2A NC High School Athletic Association baseball playoffs.

Hertford County opened Saturday’s scoring with a run in the top of the first inning. Tyrek Beverly stroked an infield single and went to second on an Alden Lassiter groundout.  Evan Lassiter followed and ripped an RBI triple to centerfield for a 1-0 Bears lead. 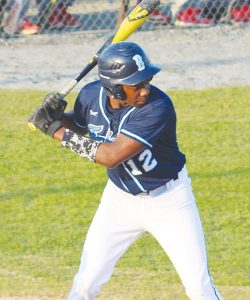 Bertie High’s Nathaniel Cheeseboro had one of the five hits for the Falcons Saturday in Edenton as Bertie topped Hertford County 4-2. The win assured the Falcons of a third-place finish in the Northeastern Coastal Conference race. | Staff Photo by Gene Motley

Evan Wells later reached first base on an error which allowed Burden to score the third run of the inning and the Falcons were ahead 3-1 after one complete inning of baseball.

Bertie held that cushion for the next three innings before the Bears mounted a threat. Alden Lassiter opened with a single and Evan Lassiter walked to get two runners on base. Two outs later, Trevor Lee walked to load the sacks, but a strikeout would end the threat.

Bertie padded their lead in the bottom of the fifth when Cottle lifted an RBI sacrifice fly that scored Trenton White, who’d led off with a double and went to third on a Damo sac-bunt.  Bertie was now in command 4-1.

Hertford County plated its final run in the top of the sixth inning. Keyshawn Lassiter was hit by a pitch to get on base. He later went to third on a Cameron Lassiter single to right field and then scored on a Beverly RBI single.  The Bears were only trailing now by two runs, 4-2.

In the top of the seventh Evan Lassiter led off with an infield single, but two strikeouts and a fly-out would end the game.

The Bears outhit their rivals 8-to-5. Evan Lassiter had three hits, two for Beverly, and one each for Cameron Lassiter, Alden Lassiter and Harrison Spence. Bertie’s five hits were one apiece by White, Cottle, Burden, Damo and Nate Cheeseboro.

Bertie is 11-13 while Hertford County dips to 8-15. Both teams qualify for the 2A state playoffs as wild cards, and both will open on the road with Hertford County at North Lenoir in LaGrange and Bertie at Midway on Tuesday at 6 p.m.

One other area team made the post-season, Gates County is in the 1A playoffs. The Red Barons have a home date on Tuesday May 8 against Roxboro Community.

Softball Playoffs: The NC High School Athletic Association released the softball pairings for the state championships, also on Monday.  Bertie, seeded 15th, will host Carrboro on Wednesday May 9 at 5 p.m. in Windsor. Hertford County, the 31st seed, is paired against North Johnston, on the road in Kenly, playing on Tuesday at 6 p.m.

AHOSKIE – Alden Cottle pitched a three-hitter and the Bertie bats ripped out 13 hits, including Cottle’s two-run homer, as... read more