‘Faith in Your Future’

BY AMANDA B. SHARPE
University Relations

However, this year also marked the 15th year of dedicated service of Chowan President M. Christopher and Mrs. White. In recognition of this significant occasion Dr. White published a book titled, Faith in your Future: The Transformation of Chowan University, which was unveiled at the conclusion of the celebration. 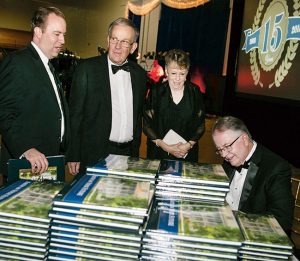 “I want this publication to be a celebration of the University, with thanks to all the people who have invested in the institution with prayers, presence, gifts, and good wishes. The opportunity to serve as president of an institution like Chowan is a gift that only few are given,” Dr. White wrote in the book.

The book is a pictorial history of Dr. White’s presidency, documenting and preserving the past 15 years that will soon be a significant part of the history of Chowan University, likely to be known as the revival years. It was edited by Assistant Vice President for Development Brooke Reich, who Dr. White specifically thanked during the celebration and in the book.

This is Dr. White’s fifth book, all penned throughout his presidency at Chowan University.

Dignitaries who could not attend, but wanted to send their well-wishes, supplied video remarks. Among those dignitaries to wish Dr. White well in his transition to Chancellor and thank him for his 15 years of service to Chowan University were former Ambassador to Denmark James P. Cain, North Carolina Senator Thom Tillis, Congressman G. K. Butterfield, and North Carolina Senator Richard Burr. Further accolades were heard from Chowan graduates from the Holy Land, and President elect Dr. Kirk E. Peterson.

Although many voices were heard throughout the evening, the sentiment was the same. Dr. and Mrs. White were the salvation of Chowan University. Though the couple will never claim the success as their own, it was following their arrival that Chowan, an institution on the brink of closure, began to flourish.

Dr. White expressed, “Our prayer is that this book might glorify the God of all of us who has allowed Chowan University to become the powerful Christ-centered institution she is today. Happy 170th anniversary to Chowan University!”

The institution is grateful to Dr. and Mrs. White for all they have given and continue to give to Chowan University. Their legacy may be known in years to come by reading Faith in your Future: The Transformation of Chowan University.

For more information regarding the publication, contact Elizabeth Davis, Assistant to the President, at 252-398-6221.