AHOSKIE – Alden Cottle pitched a three-hitter and the Bertie bats ripped out 13 hits, including Cottle’s two-run homer, as the Falcons beat Hertford County 12-2 here Tuesday night taking over sole possession – for now – of third place in the Northeastern Coastal Conference.

Bertie opened the scoring with three runs in the top of the first inning. Trenton White singled and was sacrificed to second by Caleb Damo. White then scored on Cottle’s RBI single to left field. Cottle went to third when Scoop Hoggard reached on an error. Pinch-runner Kalob Jones was inserted and he scored the second run on Jarrett Burden’s sac-fly. Hoggard later scored on a Zack Castelloe RBI single to left. It was 3-0, Bertie, after one complete inning. 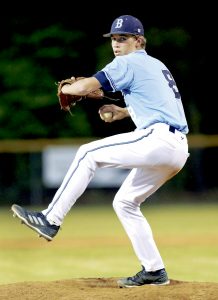 Alden Cottle kicks and delivers for Bertie on Tuesday night in Ahoskie as the Falcons topped rival Hertford County High 12-2 in five innings. Cottle had his second straight outstanding performance, tossing a three-hitter with six strikeouts. Photo by William Anthony

The Falcons added three more runs in the top of the third. Cottle doubled down the left field line and pinch-runner Jones scored on a Hoggard RBI double. Hoggard crossed the plate later on Burden’s second RBI of the game, a single to right, and he ended up at second thanks to an error on the play. Evan Wells then delivered Burden with a base-knock and it became 6-0, Bertie.

Hertford County got on the board with a pair of runs in the bottom of the third. Parker Bradley walked and scored on a Jaylan White RBI double. White would come home when Tyrek Beverly singled to right field. That made it 6-2 after three full innings.

Bertie got four runs in the top of the fourth, the big blow coming on a Cottle two-run home run while two more runs scored on an error. Bertie was running away with it, leading now 10-2.

The Falcons added their final two runs in the top of the fifth on a White RBI single followed by a Damo double for a 12-2 margin. The Bears were retired in order in the bottom of the inning and the game was done in five innings.

Cottle went the short distance for the win, allowing two runs on three hits and he had six strikeouts. Bertie had 13 hits, with White, Cottle, and Hoggard having three apiece, while Damo, Burden, Wells, and Castelloe had one hit each.

Bertie raises its record to 10-12 and 5-4 in conference play. Hertford County falls to 7-14, 4-5 in the NCC. The same two teams battle again tonight in Windsor at Bertie High’s field at 7 p.m.

Lady Bears get (another) historic win