ROANOKE RAPIDS – A Halifax County native who lived part-time with his grandmother was been charged Friday evening in her murder.

The events which led to the arrest of Isaiah Kahleal Evans Caesar, 18, began when his grandmother, Sally Copeland Evans, 74, had not been seen by family members for a couple of days and became concerned, Halifax County Sheriff Wes Tripp said in a statement.

Her grandson had been wanted for desertion by the United States Marine Corps. 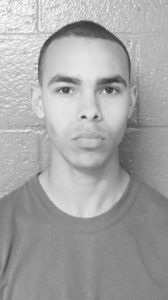 Tripp said the reason why Caesar deserted was not immediately clear. He has been absent without leave since April 2 and had been stationed in Fort Benning, Georgia, Tripp said in the statement.

His grandmother had been trying to convince him to return to the military.

The sheriff’s office received information he was at a hotel room in Rocky Mount and with assistance from that city’s police department he was taken into custody on Friday. Caesar used his grandmother’s credit card to pay for the room.

Explosive material was found in his room and the hotel was evacuated. The North Carolina State Bureau of Investigation was called to assist. No bomb was found.

Tripp said he couldn’t comment on whether the explosive material was government issued.

As investigation continued, investigators learned of the location of Evans, who was found deceased at an undisclosed location in the Roanoke Rapids area.

Tripp would not elaborate on where she was found.

He declined to say how Evans was murdered.

In addition to the murder charge, he was served a fugitive warrant for desertion and was jailed without opportunity for bond until his May 16 court date.

Turning up the heat

AHOSKIE – Robert J. Higdon Jr. vows he has no desire to fill federal prisons with those who find themselves... read more