DALLAS, TX – Former Western Carolina University defensive back Keion Crossen was selected Saturday by the New England Patriots in the seventh round of the 2018 NFL Draft. Crossen, who impressed the Patriots during his pre-draft visit, was taken with the 25th pick of the seventh round.

Crossen played his high school ball at Northampton High School where he was Tar-Roanoke Conference ‘Player of the Year’ and made several All-State teams.

On the football field, Crossen was a two-year starter in the defensive secondary for the Catamounts, amassing 165 career tackles in 46 games over his four-year career including 106 solo stops and five tackles for loss. He 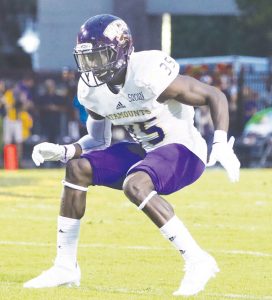 Former Northampton High player Keion Crossen (shown here against ECU in 2015) was taken in the seventh round of the 2018 NFL Draft. The Garysburg native and defensive back was selected by the New England Patriots after an outstanding pre-draft workout. | William Anthony Photography

finished with three career interceptions and a total of 19 pass break-ups – seven in both his junior and senior seasons. He also returned five kickoffs for an average of 29.4 yards per return including a long of 38 yards.

It was that athleticism that likely landed Crossen the draft pick. Though he wasn’t invited to the NFL Combine, he attended a couple of Pro Days where he was clocked at 4.32 in the 40-yard dash – a number which reportedly would have ranked first at the combine.

Crossen was a two-time conference Defensive Player of the Week, garnering the honor in both his junior and senior campaigns. In addition to his leadership on the field, Crossen was a vocal leader in the WCU locker room. For his prowess away from the gridiron, the Garysburg product was nominated for the 2017 Allstate/AFCA Good Works Team.

Crossen played for George Privott at Northampton County High for two years and his former coach said because of his work effort, he knew Crossen had a wealth of potential.

“He’s probably one of the hardest working players I’ve ever coached,” Privott said. “I’m not surprised because he’s been overlooked most of his career – even when he was recruited by colleges. This just proves all his hard work has paid off.”

Before he was even selected, Crossen indicated his inspiration in Patriots quarterback Tom Brady, who’s renowned for being the 199th pick in the 2000 draft before becoming one of the game’s greatest quarterbacks.

After being drafted, Crossen was asked about why Brady’s story meant so much to him.

“It just builds character,” Crossen said on a conference call. “You take a guy that’s one of the best quarterbacks in the league of all time and to see that he can become one of the greatest players of all time. It just inspired me because I’m also an underrated guy. Just being in the same position, it just builds confidence and character that you know that you can make anything happen with a little bit of hard work and humbleness.”