Meth arrest made in Rich Square

RICH SQUARE – For the third time this year, local and state law enforcement officers have seized evidence that led to charges of manufacturing methamphetamine (meth) in Northampton County. 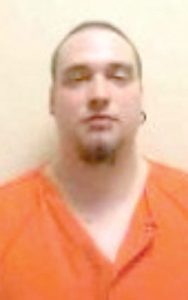 Nowell was jailed under a $45,000 secured bond and has a court date pending.

Smith said on Thursday, April 20, agents with the Down East Drug Task Force, along with the North Carolina State Bureau of Investigation (SBI), the Northampton County Sheriff’s Office and the Roanoke Rapids Police Department were following up on drug complaints at a residence on Bolton Road in the Rich Square area

“Agents discovered what appeared to be meth precursors inside the residence they were at,” Smith stated. “Agents secured the residence and applied for a search warrant. A search warrant was issued and the North Carolina State Bureau of Investigation Clandestine Lab Team responded to remove the hazardous material from the residence.”

“I also thank the North Carolina State Bureau of Investigation and Roanoke Rapids Police Department for their assistance in this case,” Smith said. “My office and the Down East Drug Task Force will continue to follow up on all drug complaints throughout Northampton County.” Smith encourages anyone Northampton County to call the Sheriff’s Office non-emergency number at 252-534-2611 or the Crime Stopper’s number (252-534-1110) to remain anonymous while sharing information on illegal activities.

In mid January, the Northampton Sheriff’s Office, teaming again with the Down East Drug Task Force and the SBI, arrested three individuals in the Pendleton area on meth related charges. Later in January, a Conway woman was arrested on similar charges.

RICH SQUARE – Two suspects are being sought for breaking and entering, larceny, and property damage after a family-owned drug... read more