CONWAY – On April 29, 2018, Lillie Mae Futrell Watson (91) of Conway left her earthly home and went to her heavenly home to walk through the Heaven’s garden with Jesus. She was surrounded by her loving family for the weeks prior to her departure.

She was born to Arthur John Futrell and Beulah Martin Futrell in the farming community of Ashley’s Grove, and married Charlie Jesse (CJ) Watson, Sr. in the fall of 1945. Together they raised three children, Beverly, Jay, and Art in Conway. 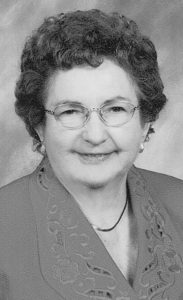 Along with her deep love for her family, she loved her church, Conway Baptist, and her community. She served the Lord in many capacities in her church, but she was mostly known for her lovely floral arrangements, especially for the Easter seasons, with many of the flowers from her and her husband’s garden.

The Red Cross was also one of her community passions. She volunteered for over 30 years with the Red Cross blood drives, and was presented the Red Cross 30 years of Dedicated Service award. She was also active in the Women’s Club and the Ladies Auxiliary of the Fire Department, Conway Baptist BWU, and the Ruritan Club Auxiliary. She and her husband were awarded the Ruritan Family of the Year Recognition in 1981.

She was preceded in death by her parents, three siblings, and Freddie R. Carroll.

She is survived by her children, Beverly Watson Carroll of Goldsboro, Charlie Jesse (Jay) Watson Jr. of Murfreesboro, and Arthur John (Art) Watson, Sr. of Conway. She had five grandchildren: Chris Carroll and wife Kim of Raleigh, Devin Carroll and wife Melissa of Raleigh, John Watson and Anna of Conway, Ben Watson of Conway and Jessica Watson, of Millennium. Her great grandchildren are Alex, Kendall, Ryan, Holden, Nate, Evi, AJ, and Corey Phipps.

For the last ten years of her life she was watched over by a new family, the nurses and staff at Northampton Nursing Home.

Visitation will be held at Bridgers’ Funeral Home in Conway, NC on Wednesday, May 2 from 7:00-8:30 pm. The funeral will be in Conway Baptist Church at 11:00 am on Thursday, May 3 with internment afterwards in the Town of Conway Cemetery.

Although flowers were her passion, the family respectfully requests that in lieu of flowers, donations be made to Conway Baptist Church or the American Red Cross, local chapter.

AHOSKIE – Funeral services for Clarie Parker of Ahoskie, formerly of Emporia, VA, will be held at 11 a.m. on... read more