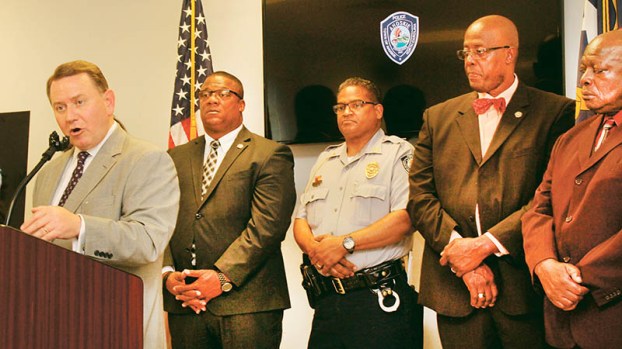 Turning up the heat

AHOSKIE – Robert J. Higdon Jr. vows he has no desire to fill federal prisons with those who find themselves addicted to drugs.

Rather, the United States Attorney for the Eastern District of North Carolina wants to fill jail cells with suppliers of narcotics, to include organized criminal groups, as well as those committing violent offenses in connection with their distribution of illegal drugs. Through that effort he says the crime rate and drug addiction will take a noticeably downward turn.

Higdon was at the Ahoskie Police Department on Wednesday where he was joined by local law enforcement and judicial officials at a press conference to announce a new initiative – Take Back North Carolina.

Higdon, a veteran 25-year federal prosecutor, was appointed last year by President Trump to lead North Carolina’s Eastern District of the U.S. Department of Justice. He said this initiative is based on a foundation of revitalizing the cooperation between federal, state and local officials. 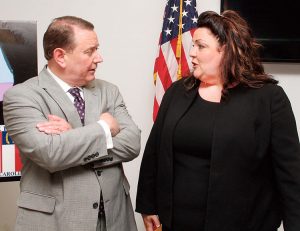 Higdon chats with local District Attorney Valerie Asbell at the close of the press conference.

“We want to take back North Carolina from the violent criminals and drug traffickers that plaque the eastern district; we want to take the fight to them,” Higdon stressed.

He noted in recent years (2014-16) there has been a seven percent increase in cases of violent crime across the nation. Assaults are up by 10 percent; rape cases have increased by nearly 11 percent; and the murder rate shot up by over 20 percent.

“Meanwhile, our country is suffering its most deadly drug crisis in its history,” Higdon noted. “In 2016, an estimated 64,000 Americans died of drug overdoses; that’s one every nine minutes. That death toll rose higher in 2017.”

He said in North Carolina alone, the SBI estimated that three die every day due to drug overdoses, many due to fentanyl and heroin. Higdon reported that overdoses are the leading cause of death for Americans under age 50.

“Sadly, eastern North Carolina is not immune from these problems; the unintentional opioid-related death rate here is higher than the rest of the state,” Higdon revealed. “We’re seeing growing heroin and fentanyl use across this district. People are suffering; people are dying.

“Let me put this very clearly, we will not stand back and let crime rates and drug addition continue to rise,” he continued. “We will not cede one block or one street corner to violent thugs or people who are peddling drugs.”

Higdon said the “take back” initiative was developed through Trump’s campaign promise to reduce crime in America and to make communities safe again. He is following that lead by working with his team of federal prosecutors along with local sheriffs, chiefs of police and district attorneys. That effort also includes local interaction with the faith-based community.

“We are prepared to work at this problem until every community, every neighborhood, every street, every home is safe and secure and free from the worry of violent crime and drugs,” Higdon vowed.

Working closing with local law enforcement, the new initiative promises to attack violent and drug crimes from numerous angles, to include having the full weight of federal court system.

One of the key elements in this carefully coordinated attack is revitalizing the Organized Crime Drug Enforcement Task Force Program. That includes assigning an aggressive attorney to lead that effort.

Project Safe Neighborhoods is another program that will see its former fire rekindled. Higdon said that program targets the most violent offenders, to include those who possess guns illegally.

“We have fully staffed that program with aggressive and skilled prosecutors,” Higdon said.

While these federal programs have successful track records in the past, Higdon stressed that the “real work lies on the streets, in places like Ahoskie.”

Higdon said he has directed all resources in his office to focus in addressing local issues.

“I don’t mean we’re going to give lip service; these resources will be dedicated to strategically targeting the worst offenders in each community and prosecuting them in federal court,” he said.

He has developed a system of six geographic districts in eastern ‘Carolina.

“Law enforcement in each of these districts will have a point of contact in my office to ensure that cases are reviewed and accepted for federal prosecution as rapidly as possible,” Higdon remarked. “This also allows local law enforcement to legal advice at the federal level in the midst of investigations, which maximize our level of success when taking these cases to federal court.”

He added this stage of the initiative is already underway in the Roanoke-Chowan area where federal prosecutors have met with local law enforcement and local District Attorney Valerie Asbell.

“We have met to identify the most serious offenders – we know them by name; develop strategies on how to prosecute them in either state or federal court; and quickly move these cases,” Higdon noted, adding there will be no bureaucratic delays in moving these cases efficiently through the justice system.

“We will remove these offenders from our communities and drive down the crime rate,” he added. “These frontline relationships are particularly important as we face the drug overdose cases that are plaguing our state.”

Higdon stressed that in cases where a user of a particular drug dies from an overdose, the drug pusher can be charged with second degree murder and tried in either state or federal court.

“In federal court, we can take advantage of a 20-year mandatory minimum sentence where death was the result of a drug charge,” he stated, adding one such case was recently tried in Wilson County where a heroin dealer received 27 years behind bars.

“Here me clearly, we will identify the worst offenders in the communities all across the Eastern District and move aggressively against them and bring them to justice in federal court,” Higdon added.

He promised there will not be any “charge bargaining.”

“Whatever the most serious charge is, that’s what we will bring in federal court,” Higdon stressed.

Additionally, if a gun is carried during a drug transaction, that automatically tacks on a five-year prison sentence to the drug dealing offense. If that gun is drawn, criminals can expect an additional seven-year sentence. If that gun is discharged, it adds 10 more years.

“And, remember, in federal court, there is no parole; no exceptions,” Higdon remarked.

To speed up the court process, Higdon said those taking a plea have 14 days to accept it.

“That avoids unnecessary preparation for trial by prosecutors, but more importantly for law enforcement officers who need to focus on other things,” he said.

The initiative also targets leaders of criminal organizations, to include gangs.

“The heat is on. It is critical for us to move up the chain of drug trafficking and violent crime organizations and bring to justice those who don’t pull the trigger or don’t sell drugs in the streets, the ones who call the shots and profit from crimes committed by others,” Higdon stated.

He said civil attorneys will also be used within the initiative. They will handle the seizure and forfeiture of assets held by drug dealers and violent criminals.

“We will pursue anything they have of value,” Higdon remarked. “If the crimes they are involved in generate cash, we will seize it. If their fancy car was purchased with drug money, we will take it. If your house or business facilitated a drug crime, you will forfeit it.”

He added the “Take Back” initiative also targets doctors and pharmacists who are guilty of over-prescribing dangerous drugs, especially opioids.

“Medical professionals who illegally prescribe or distribute medication will be treated as drug dealers,” Higdon noted. “We will go after their license to practice.”

The underlying message to those thinking about entering the realm of distributing drugs, and the violent acts committed during such transactions, is to make them aware that they have a choice.

“We hope they choose not to go down that road,” Higdon noted. “We want to deter people from committing crimes rather than having to prosecute them after committing a crime.”

Higdon praised the local law enforcement officials by stating, “they are on the front lines doing the bulk of the work.”

“As a resident of this state; as a husband and a father, I commend them for the work they do, to include the work of your local District Attorney,” he said. “The announcement of this initiative sends a message that we at the federal level are in a strong partnership with those here at the local level. We will provide help and support in this important fight. We are willing to do this hard work to take back North Carolina.”

Those local law enforcement and judicial officials say they welcome the federal assistance.

“I’m excited about this initiative,” said local District Attorney Valerie Asbell. “I have met with Bobby (Higdon) and his staff, along with all our local sheriffs, police chiefs, and our Down East Drug Task Force. We stand together to take back North Carolina; take back Hertford, Bertie, Northampton and Halifax counties from the criminals.

Asbell added she has devoted two prosecutors in her office to this initiative.

As a former member of an FBI Task Force, Hertford County Sheriff Dexter Hayes understands the value of having federal law enforcement stand toe to toe with local authorities.

“This partnership brings a new effort to working the streets, which will lead to keeping our communities safe,” Hayes said. “We all have one common goal, that is taking back our streets from the violent criminals. This partnership can and will make that happen.”

“I can say the same thing that’s already been said, so I just want to say thank you to our U.S. Attorney and his staff for working with us to take back our streets, to take back our communities and make them safe again,” stated Ahoskie Police Chief Troy Fitzhugh.

“The Task Force helps; once they started taking over we’re seeing lower crime rates in my county,” he said. “Plus having a DA (Asbell) that you can call day or night helps. Now with the federal initiative I can see a real big change coming.”

“I thank our President for providing the motivation to all of us to get busy with making our communities safer,” said Gates County Interim Sheriff Robert Jordan.

“Listening to each other’s ideas and having two-way input really helps,” remarked Roanoke Rapids Police Chief Chuck Hasty. “Having the federal help will help us get the most violent offenders off our streets.”

Ahoskie Police Major Jimmy Asbell, who also serves as the Commander of the Down East Drug Task Force, welcomed the federal initiative with open arms.

“I can tell you that cooperation at the local, state and federal levels works; I’ve seen it before,” said Major Asbell. “We will be able to see the fruits of our labor through this new initiative.”

Fielding questions from the media, Higdon discussed programs to help those addicted to the drugs being peddled by the pushers and encouraged citizens to report drug-related activity they see in their communities to local law enforcement.

AHOSKIE – You can’t say Melvin Hawkins doesn’t like to stay busy with his career in education. The former superintendent... read more