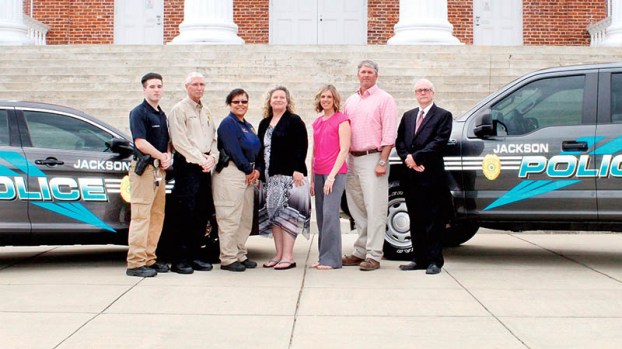 JACKSON – With “Jackson Police” on the sides and “In God We Trust” emblazoned on the bumpers, two new vehicles for the Jackson Police Department are now patrolling the streets.

“It’s great to be able to provide this and be able to continue to provide a safe community for everybody to live,” said Mayor Jason Morris of the new additions.

The town was able to purchase the new vehicles through a grant and loan from USDA Rural Development. They received $20,000 as a grant as well as $36,800 as a loan to be paid off over the next seven years.

“This year I let my guys pick out what they wanted,” said Jackson Police Chief John Young, noting that this is the second time the town has purchased new vehicles through the USDA program.

The new vehicles, which were put into service on April 18, are a gray 2018 Ford Taurus and Ford F-150 truck. Both are law enforcement rated. Chief Young explained they chose an eye-catching decal package for the new vehicles so they would be more visible in the community.

“We want to let them know that we’re here and on patrol,” Young explained. “Patrol is the best deterrent to crime there is.”

“In these small communities, you look for opportunities to let your taxpayers see some visible usage of their tax dollar,” added Jim Gossip, one of the town commissioners. “This gives people an opportunity to see their tax dollars at work.”

Mayor Morris mentioned that, thanks to the Sheriff’s Office, the Jackson police do have an expanded patrol area outside of town too, so the benefits of the new vehicles are not solely for the people who live within the town limits.

As for the town’s older police vehicles, Chief Young reported the department’s plan was to sell the one with higher mileage and keep the other one to serve as backup if necessary.

All three town officials acknowledged their gratitude to the people who made getting the new vehicles possible.

“We’re thankful to USDA Rural Development for allowing us the grant and the loan to obtain these,” Morris stated.

“Greg particularly was very instrumental in doing a lot of the footwork,” Young said before adding, “Angel did a lot of hard work. She’s the one who kept all the finance stuff together.”

Young also thanked Gossip and the rest of the town commissioners for encouraging them to pursue the opportunity.

“I thank the town board for giving us that support,” he said. “This is a tremendous investment in our infrastructure.”

Gossip echoed their sentiments and explained the town board had no qualms supporting the endeavor for the new vehicles.

WINDSOR – A man previously convicted of engaging in sexual activity with an eight-year-old received an active prison sentence for... read more