Married for 50 years, the couple, who reside in Ahoskie, has faithfully served a number of state Baptist institutions, including Chowan University.

A native of Martinsburg, WV, Austine spent 31 years in education, first at Peace College in admissions, then as a high school counselor in Hertford County, and ultimately as a senior administrator and vice president at Chowan University, where she now serves on the Board of Trustees. She serves 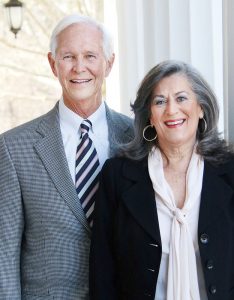 with the Woman’s Missionary Union (WMU) and Meals on Wheels and is a past member of the Committee on Nominations of the Baptist State Convention of North Carolina. Austine attended Wake Forest University for her undergraduate and master’s degrees.

Born in Norfolk, VA, Ernie began his career as a lawyer, working first as a research assistant in the North Carolina Supreme Court, then as assistant attorney general, and finally as a partner at Cherry, Cherry, Flythe, and Evans in Ahoskie. He then turned to agriculture, first as vice president of E.R. Evans and Sons, Inc. and then as president of ELE, Inc. in Ahoskie. He has been a trustee of the North Carolina Baptist Hospital for 25 years, serving as chairman for six of those years. Ernest attended Wake Forest University for both undergraduate and law school.

They currently work alongside each other as president and vice president of ELE, Inc. The couple have been active members of First Baptist Church Ahoskie since first moving to the town in 1972, both serving as deacon and Sunday School teacher. Together they sponsor the Evans Poteat Scholarship for NC Baptist students at Wake Forest University and the Evans Family Scholarship at Chowan University.

Back in the ‘bullring’