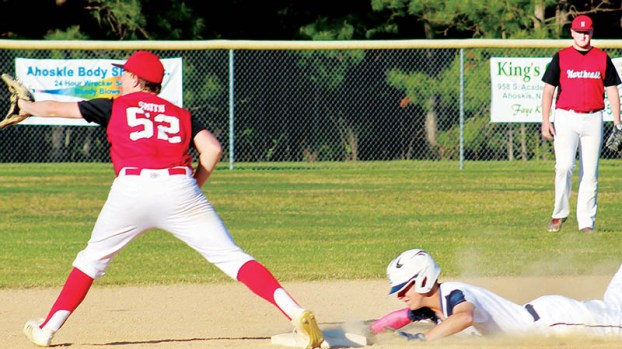 Ridgecroft School’s Lane Slachta (right) slides into second base with a double in Friday’s game as the Rams secured the Tarheel Independent Conference regular season championship with a 13-0 shutout of rival Northeast Academy. | Staff Photo by Gene Motley

The Eagles must’ve felt good Ryan Rowe and Brandon Polson opened with back-to-back singles in the top of the first inning for Northeast, but Stevens sat down the next three batters in order.

The Rams then went to work, getting things started in their half of the first when Glover singled with two runners aboard on the first pitch of his at bat, scoring both; from there, Lane Slachta, Finn Dunn, Jack Jones, and Stevens all moved runners across the plate with RBIs in the inning, seven in all for a 7-0 lead.

Stevens earned the win for Ridgecroft. He went five innings, allowing zero runs on two hits, striking out 11 and walking one.

L.J. Barnes started the game for the Eagles. He allowed six hits and seven runs over two-thirds of an inning, walking one. Rowe and Kevin Taylor entered the game from the bullpen, each throwing one and two-thirds innings respectively.

The Rams tallied nine hits in the game. Jones and Slachta each had two hits to lead the hit parade. Glover, Stevens, Wyatt Whitley, Boone Barkley, and Jacob Parker had one hit apiece.

The Rams ran wild on the base paths with five stolen bases, led by Stevens with two.

Ridgecroft raises its record to 12-3-1, 11-0 in the TIC, and they will close the season with a non-conference game at Halifax Academy Wednesday before Senior Day Thursday against Lawrence Academy.

AHOSKIE – Three Ridgecroft School pitchers combined to pitch a six-hitter as the Rams beat The Albemarle School 6-1 in... read more