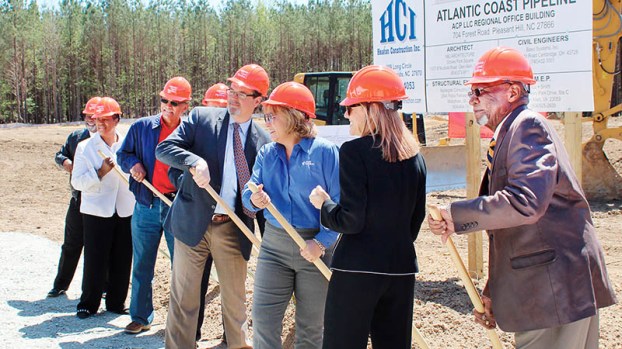 McKay delivered this statistic during his opening remarks at a groundbreaking ceremony for a pipeline regional office and compressor station held here on April 20.

“We have had good days. We’ve had some bad days working on a project of this magnitude of course,” McKay continued. “This is one of the best days of our project, to gather to mark the kickoff of an important facility like this with all of the approval so we can get underway. It’s really one of the best days.”

Local officials, representatives, and construction workers who attended the ceremony were shuttled from Glover Construction on Highway 301 in Pleasant Hill to the site where the new buildings will be erected. The Virginia state line was only a stone’s throw away.

The site itself, located down a winding gravel path, still had the smell of freshly cut pine trees from where it had been recently cleared to make way for the new buildings. Just like the project had physically changed the area it was located, McKay noted the project will bring other changes as well.

“This is a transformational project for eastern North Carolina, Virginia, our companies, the economy in so many ways,” he said.

Once constructed, the Atlantic Coast Pipeline will originate in West Virginia and carry natural gas through Virginia and North Carolina, crossing a total of 600 miles from end to end. The pipeline will cross into North Carolina at the compressor station site in Northampton County, and then follow a route roughly the same as Interstate 95 before ending in Robeson County. A spur line will also travel eastward towards the Hampton Roads, VA area.

The groundbreaking ceremony was held to commemorate the start of construction on the NC/VA regional office as well as the compressor station. Heaton Construction, from Roanoke Rapids, is contracted to do the work, but other local companies such as Glover Construction and MJ Price Construction have also assisted with subcontracting work.

McKay went on to list a multitude of benefits from the pipeline project for both the companies involved as well as the counties and surrounding areas.

For Dominion Energy and its partners, he said, the pipeline helps them transition more towards cleaner energy sources, and also brings added reliability as a power source. Natural gas also works well in partnership with renewable energy providers like solar farms to keep the energy output at a steady level.

“This will bring an additional supply of natural gas into eastern North Carolina,” McKay explained. “Today North Carolina relies on one pipeline out west for virtually all its natural gas.”

For Northampton County, McKay continued, the benefits will manifest in property tax revenue, better pricing for consumers, increased industry recruitment, and more jobs and job training. On April 19, Dominion Energy conducted a job fair at Halifax Community College for local people to learn about opportunities available to work on the project.

“They launch a career by this project, getting trained to work on it,” he explained about their goal to help workers develop the necessary skills which they can carry forward even after construction is complete.

“We said from the beginning we want to make sure this project benefited local communities every step of the way, and that we would always try to find local hires, local vendors and suppliers,” McKay continued.

The benefit of job training was something Northampton County Commissioner Fannie Greene mentioned as well when it was her turn to address the crowd. The compressor station and office are located within her district, but she noted the whole county will benefit.

“One of my goals as a commissioner has been to retain our young people in Northampton County when they complete high school and college, and that has been a difficult task with very limited jobs,” she said.

Greene acknowledged that the ACP will bring the county closer to that goal by adding new jobs and increasing the number of skilled workers. The added incentive of easily available natural gas will potentially bring in new industries to the county as well.

“Thank you for this great opportunity,” she said.

“The Northampton County Commissioners were the first to give the Atlantic Coast Pipeline a resolution of support,” he stated.

He acknowledged that the additional tax revenue the county will receive from the project will benefit the citizens, saying, “this funding opportunity comes when local budgets are tighter than ever and we have to stretch our money further.”

“I feel diligently that in order to move forward, you’ve got to eliminate those variables that hinder you from being successful,” Mayor Bell said, acknowledging that the ACP project will provide that kind of opportunity for the area.

“I really feel like this is a win-win for everybody,” Bell concluded.

Representative Wray took a quote from the movie “Field of Dreams” to summarize how he felt about the project: “If you build it, they will come.”

Wray said the project was a long time in the making, but it was finally being realized through the efforts of everyone working together. He expressed gratitude towards the local companies involved and to Dominion Energy for what they had done to give back to the community as well.

“We’ve made lots of promises and we now owe it to you to do it the right way,” McKay concluded with reassurances Dominion Energy would handle the upcoming work with care.

By Amanda Bradshaw Sharpe University Relations MURFREESBORO – During the Board of Trustees luncheon on April 5, President M. Christopher... read more