Back in the ‘bullring’

WINDSOR – Norman Cherry, a former Bertie County Schools educator and administrator, beat out three other candidates to succeed the late Barry McGlone as the District-4 representative on the county’s Board of Education.

McGlone passed away suddenly on March 4. He was serving his first term on the Board, having been elected to the post in 2014, and he was voted as vice-chairman a year ago.

Cherry was among four candidates who were interviewed for the post, including former school board member and Kelford agri-businessman Alton Parker, Roanoke-Chowan Community College instructor Fannie Pugh, and Vivian Saunders, former Family Resource Center and founder of the alternative school, The Hive.

At the school board’s April 17 meeting the final vote was held among the three sitting members: Bobby Occena, 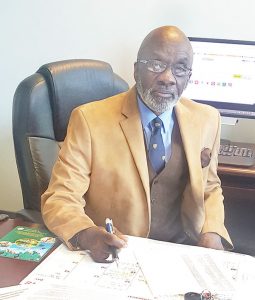 Former teacher, coach, principal and county commissioner Norman Cherry has been named to fill the seat on the Bertie County Board of Education left vacant by the March 4 death of Barry McGlone. | Contributed Photo

Emma Johnson, and Tarsha Dudley. The board’s fourth member, Jo Davis Johnson, was absent due to illness, but was able to hear the proceedings via a telephone hook-up. She was permitted to vote in absentia according to board attorney Rod Malone. However, since there was a quorum and because of the absence, her vote would only count in the event there were less than two votes for one candidate among the remaining voting members.

“We have four excellent applicants with unquestionable qualifications,” said chairman Occena. “We narrowed it down to these finalists.”

Occena then announced the appointee would be selected by written ballot, and ballots signed individually by each member. After the vote of the four members, the ballots were collected and Malone read out the vote-count, which was 2-1 with Cherry receiving the nod. Pugh received the other vote.

He will be formally seated at the school board’s May meeting.

During public comments, Bonnie Jones – while congratulating Cherry on his appointment – felt there should have been a voice vote instead of written ballot.

Meanwhile, Cherry says he is excited to begin this new phase of his life in education.

“I’m happy to be given the opportunity to serve and to give back to the children of Bertie County,” Cherry said in an interview. “Education has been a life-long career for me.”

A Lewiston-Woodville native, Cherry began as a teacher in Martin County following his graduation from Elizabeth City State University; voted ‘Teacher of the Year’ in 1976. He returned to Bertie County, first teaching and coaching at West Bertie Elementary, and later serving as principal with various Bertie schools over the next 20 years. From 2009-11 he served as assistant and later interim principal of Bertie High School and Bertie STEM High School.

“I started as a classroom teacher and went into administration and even worked as a field consultant at my alma mater (ECSU) for new principals and principals-to be,” he noted.

“I guess you could now say I’ve come full-circle,” he added.

Cherry was non-committal on whether he would seek a full-term in the November election.

“It’s really a little early,” he admitted. “First I want to get into this position and do what I can to assure the children of Bertie County are given the best possible education we can give them to be successful in life. I want our system to be the model that other (school districts) will emulate or copy.”

Cherry recalled the football state championship years of Bertie High School in both 1995 and 2000.

“There was a pride in the county that we had about athletics,” he acknowledged. “I want that same type of pride to exist academically as well, not just in athletics.”

Cherry says he is impressed with the ‘Listening Tour’ undertaken by new superintendent Dr. Catherine Edmonds, where she visits various business and community venues around Bertie County soliciting input.

“First, I want to make sure I listen to what parents have to say as they share with us their concerns,” he noted. “(Afterward) I then want to incorporate those concerns into our plans for student success.”

Cherry harked back to the motto of former Bertie superintendent Dr. Nettie Collins Hart back in the early 2000’s and how he wants to apply it years later.

“Her motto was, ‘What About the Children’,” he said. “That’s where I am; it’s about the children.”

Habitual felon gets 7-to-10 yrs. behind bars