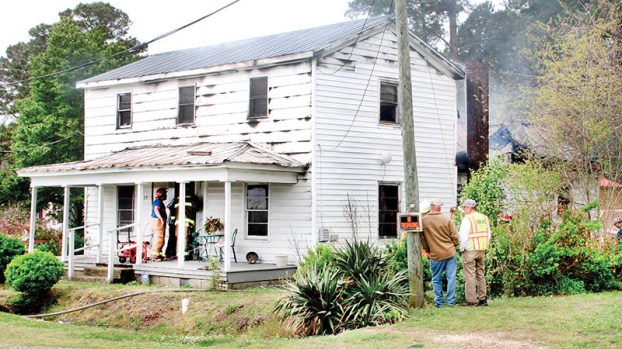 A four-alarm fire alerted emergency responders to a Monday morning blaze at 2547 NC 45 in Colerain. The structure remains standing, but the majority of the interior was gutted by the blaze. | Staff Photos by Cal Bryant

The latest blaze was reported at 10:55 a.m. on Monday at which time members of the Colerain Volunteer Fire Department were summoned to a blaze at 2547 NC 45, just south of the Family Dollar store.

Colerain VFD Chief Milton Felton said the fire appeared to break out in the kitchen area, located in the rear downstairs portion of the two-story structure.

Felton added that due to the closed proximity of adjacent residences (one on each side), he immediately summoned the assistance of nearby volunteer fire departments in Perrytown, Trap and Harrellsville.

“The wind was kicking up a bit Monday morning; knowing the area like I do and knowing that there were two other houses very close to the fire scene, I didn’t hesitate to call for additional manpower and water,” Felton said. “But we were able to knock the fire down fairly quickly, so much to the point that the fire did not affect the other two homes.” 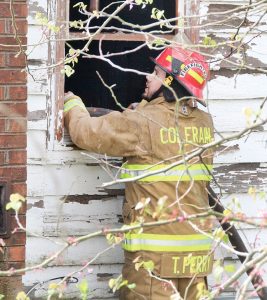 A member of the Colerain Volunteer Fire Department checks for a hot spot at the rear of the home on Monday morning.

Toni Brown and Jeffrey Mavine own the damaged home. Neither was injured.

“We lost basically everything we had, to include over $200 worth of meats we had just purchased,” Brown told the Roanoke-Chowan News-Herald. “They (firefighters) were able to save some of our old family photos and a few other things, but everything else is ruined.”

Brown added that she was glad neither she nor Mavine were asleep at the time of the fire.

“But the fire alarms we have in the house did work,” Mavine said. “They (firefighters) had to beat one with an axe to make it stop after it had fallen from the ceiling.”

Felton recalled a fire at the same residence approximately 25 years ago.

“If I remember correctly, that fire started in the attic,” he said. “We know where this one started, but as of right now we have not determined how it started. We do know it was not caused by something cooking on the stove.”

One week ago (Thursday, April 12), the Colerain firefighters rushed to a residential fire at 203 Glovers Cross Road. That call came in at shortly past 2 p.m.

“I wasn’t in town at that time, but our members said they could see heavy black smoke coming from the direction of that home when they were answering the call,” Felton said.

The Colerain Fire Chief added that Kristie Garcia rented the home, which she shared with another adult and four children. Ms. Garcia was alone in the home at the time of the fire.

“She told us that before the fire was detected, she smelled something burning inside the home,” Felton said. “She said she called an electrician to check it out and when he arrived he went to the breaker (electrical) panel and it was so hot that he couldn’t touch it.”

Felton added that the fire started in the attic and was believed to be electrical in nature.

“The home was a total loss; nothing could be salvaged,” he reported.

The Colerain VFD, who received assistance in battling the blaze by Perrytown and Trap firemen, stayed on the scene for over five hours.

Habitual felon gets 7-to-10 yrs. behind bars