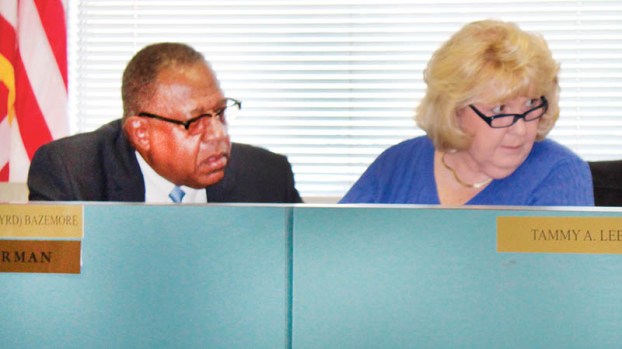 Bertie County Elections Board chairman Glenwood Mitchell and vice-chair Carol Woodard listen to evidence at a Tuesday hearing on a petition filed before the board challenging the residency of Sheriff’s candidate Adrian Bowen. The Board voted 3-1 that Bowen did not meet the residency requirement. | Staff Photo by Gene Motley

WINDSOR – In a 3-1 vote here late Tuesday afternoon, the Bertie County Board of Elections voted to uphold a petition filed by two Bertie citizens challenging that Democratic sheriff’s candidate Adrian Bowen did not meet the residency requirements for the office of Sheriff of Bertie County.

Retired NC State Highway Patrol Sergeant Adrian Bowen filed for the office in January as a challenger to incumbent Sheriff John Holley in the upcoming May 8 Democratic primary.  At the time of his filing, Bowen listed 110 Robin Lane in Windsor as his residence.

On March 12, Bertie County registered voters Vivian Clark and Chavuletta Jones-Sexton filed a Petition for Judicial Review through Edenton attorney Paul Faison S. Winborne claiming Bowen did not reside at the Robin Lane address for the required amount of time as to be considered a resident of Bertie County. Rather, the petition claimed that Bowen lives and owns a business at 504 Troy Drive in Elizabeth City. The petition further claimed that Bowen is married and his wife, Kia Corsey Bowen, is registered to vote in Pasquotank County as of March 2018. Mrs. Bowen’s voter registration lists an address of 504 Troy Drive, Elizabeth City.

At the hearing, held in the Bertie County Commissioner’s Room, both Bowen and the petitioner were given the chance to present their case before the now-four member Board of Elections. Bowen was seated at a table across from petitioner Clark and attorney Winborne. The proceeding was presided over by Elections Board attorney Lloyd Smith.

“The burden of proof requires that Mr. Bowen must show by the preponderance of the evidence that he is and has been a resident of Bertie County for one year before the general election,” Smith said. “The Board’s role is to decide fairly the one issue before it.”

Bowen opened by presenting a packet containing over 100 pieces of evidence, including among other things: affidavits, vehicle registration, tax records, utility bills, deeds, etc., as proof of his residence at East Robin Lane.  As each piece was examined, Bowen stood through the proceedings militarily erect.

After the board members and the petitioner meticulously examined Bowen’s evidence (consuming well over one hour) there was a short 10 minute recess after which Bowen gave sworn testimony.

He was asked his plans for the home in Elizabeth City (he planned to rent it); how often he spent nights in Windsor (3-to-4 nights a week; often related to his janitorial business); whether his wife and child would be joining him in Windsor at a future date (they would); and, if he would remain in Bertie County no matter the outcome of both the Board’s decision and the primary election (he would).

Bowen stated the Robin Lane residence had 10 rooms and a carport. He then stated he voted in the 2016 November election in Bertie County. When pressed, he answered that it was an oversight on his part to have paid his filing fee in January with a check drawn on a bank based in Elizabeth City.

“I had two boxes of checks that I needed to use up,” he testified. “In the last few days I’ve switched (my account) over to the State Employees Credit Union.”

Winborne then began his cross-examination comparing the dimensions of the two homes, both in Pasquotank and Bertie counties.

“Based on square-footage, that home in Elizabeth City is about one-third smaller than the house in Bertie,” Winborne inquired.

Bowen challenged the tax records claiming the smaller home could support additional occupancy beyond one person.

Winborne then entered several items of evidence, or exhibits: among them, tax records from the two counties, the cleaning company’s annual report, and the cancelled filing check.

“It sounds like you’re spending the time between the two residences,” Winborne noted.

The attorney also questioned the change of billing address for some of the Windsor utilities; the opening of the Windsor checking account; why Bowen’s late father lived in Elizabeth City in 2016 while his son testified he himself was living in Windsor (he stated it was because of NCSHP training); and, why his child was not enrolled in Bertie County Schools despite his residing at Robin Lane since 2016.

Neither party called any additional witnesses to present relevant information or to enter additional evidence on Bowen’s behalf.

Winborne’s summation said he believed Bowen may have missed the residency requirement by a few days.

“Saying you’re a resident of this county is not enough,” he stated.  “The question is: is he actually living there? That is a factor of whether it is an appropriate residence.  Has he shown abandonment with no return and the intent to make this his permanent residence?  I don’t believe he has met the burden of proof.”

Bowen summed it up saying he saw nothing in the law stating he could have more than one piece of property. He cited living in a residency 30 days prior to his vote in 2016 and living in the residence for one year from November 2017 to November 2018.

“This is the primary, not the general election” he said. “I filed my residency in 2016; I believe I have met my burden.”

Following another short recess, Smith reiterated the requirements: abandonment of the former residence with no return, acquisition of a new domicile, and the intent to make the new domicile permanent.

“I think we’ve had a transparent process here,” Smith said. “There have been two NC Supreme Court cases dealing with residency; but there’s never been a Sheriff’s residency question that’s gone before them so the use of the same rules would apply.”

The board members asked for clarity on ‘abandonment’ to which Smith defined as intention to permanently leave one domicile and establish residence at another.

All queries satisfied, the vote was taken and announced with three members voting Bowen had not met the burden of proof of residence, with one members voting that he had.

Following the ruling, Smith informed Bowen that he would receive a written judgment, outlining the proceedings, after which he, Bowen, could file an appeal with the state Board of Elections in Raleigh.  Bowen stated that he would like to do so.

Petitioner Clark had no comment following the vote, while Jones-Sexton spoke a one-sentence statement.

“All I wanted was the truth,” she said.

“I think the Board listened to the evidence,” said Winborne. “It was an impartial hearing.”

None of the Elections Board members had a comment, and Bowen also had no comment, other than to re-state that as soon as he received his judgment he would be filing an appeal to the state board.

Because the May primary ballots have already been printed, regardless the outcome of his appeal, Bowen’s name will still appear. Later, on Wednesday, State Elections Board Deputy Counsel David Smyth said that if Bowen’s appeal is denied, even if he is the top vote-getter in the Democratic Primary for Bertie Sheriff, his votes would not count.

“If the appeal is denied and Bowen is still the top vote getter, that vote will not be canvassed,” Smyth said. “The reports of that race will be “hidden” in our internal system, and the vote will not be reported on election night.  Bowen’s opponent will be the nominee, and eventually the (primary) winner.”