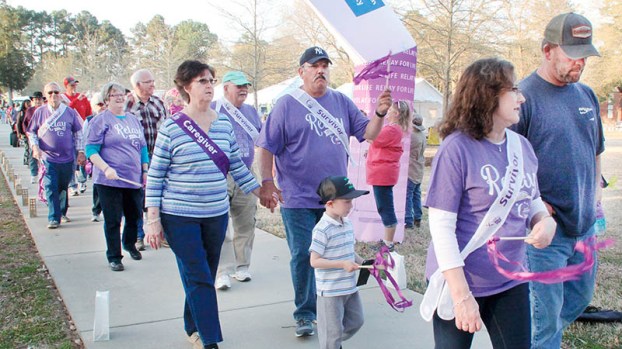 Cancer survivors and caregivers take the ceremonial opening lap of the annual Hertford-Gates Relay for Life, held Friday and Saturday at Squirrel Park on the campus of Chowan University. | Staff Photos by Cal Bryant 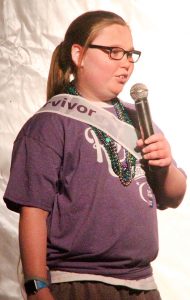 Emma Ward and Susan Brinkley (below) shared stories of their brave fights against cancer. See page 12 and the R-C News-Herald’s Facebook page for additional photos from the event.

MURFREESBORO – Their ages are separated by several decades, but Susan Brinkley and Emma Ward share a common bond – each can say they stared cancer squarely in the face and lived to tell about it.

Brinkley, a former critical care nurse and EastCare flight nurse who is now the Director of Quality, Regulatory and Patient Safety at Vidant Roanoke-Chowan Hospital, and Ward, a middle school student who celebrated her 14th birthday yesterday (Monday, April 16), were the featured speakers here Friday during the opening night of the 18th annual Hertford-Gates Relay for Life.

The event was held at Squirrel Park on the campus of Chowan University.

For Brinkley, she received the life-altering news of having breast cancer several years ago. That came after performing a self-check, where she felt a lump. A mammogram performed the very next day confirmed her worst fears.

“All of a sudden my life hit a brick wall and I fell apart crying; I cried so hard that a friend had to take me home,” said Brinkley, a registered nurse for 38 years.

The very next day, Brinkley, accompanied by her husband, Doug, made the short drive to Murfreesboro from their Ahoskie home to break the news to their daughter, Elizabeth – then a senior at Chowan University.

“It was one of the hardest conversations I’ve ever had,” Brinkley shared, speaking to fellow cancer survivors seated in front of the Relay for Life main stage.

Reality set in deeper when Brinkley realized that for all those years she doled out medical care as a nurse, she was about to become a patient.

“That weekend, Doug and I went to church three times where we cried and prayed,” she recalled. “The church was empty, except for us; you see, it wasn’t Sunday, but we went there to find strength and to find peace.

“I’ve always been told that you pray the hardest when it’s the hardest to pray,” she added. “We stayed on our knees a lot that first weekend after the diagnosis.”

Brinkley did find what she was looking for.

“In that small, country church (Earlys Baptist), God gave me the peace to deal with my cancer,” she noted. “Then, the fight was on as I knew that if you feed your faith, your fears will starve to death, and then you can face the unknown.”

However, cancer is known to throw a curveball or two. That happened in Brinkley’s case as a second mass was discovered in her left breast, then a third one was detected in her right breast. She believes that the cancer began due her previous habit of keeping her her cell phone in her bra.

“At that time my family and I decided that I would have a bilateral mastectomy,” she said.

That surgery took place on Nov. 22, 2013. It was followed by several rounds of chemotherapy and radiation treatments over the course of 2014.

“I prepared myself to be a patient; a place I never thought I’d be,” Brinkley stressed.

Fifteen days after her first round of chemo, Brinkley’s hair began to fall out. To deal with it, she had her daughter to completely shave her head the same night.

“It was important for Elizabeth to be part of my care,” Brinkley remarked. “You see, cancer affects your whole family and they want to be involved in taking care of you.”

The females in her family gave Susan a “hat party” with each bringing a hat for her to wear.

Meanwhile, Brinkley didn’t miss a beat at work. She continued her job full-time, taking chemo on Fridays, which gave her the entire weekend to rest.

Radiation treatments followed….she would take those in the mornings and then go to work.

“What you come to realize as a cancer patient is where I had started, where I was today, and where I would finish,” Brinkley noted. 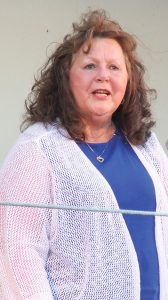 “Another thing is the people you meet on this journey,” she continued. “They touched my life and that of my family. And whether they were sitting with other chemo patients while receiving treatment, or the nurses providing the treatments, or the families in the waiting room, my family, my friends, my church family and my co-workers all touched my life on this journey and I appreciate their love.”

Brinkley closed with a message of hope, saying that cancer-related deaths are declining nationwide. Locally, she said that although cancer remains as the leading cause of death in Hertford County, that rate has declined by 20 percent. Breast cancer deaths are down by 17 percent locally over the past five years.

“The reason for that is women are getting mammograms and men are being tested for prostate cancer on a frequent basis. Everyone is trying to catch it early. The survival rates are dramatically increasing for all types of cancer due to early detection. There are new treatments being administered almost every day. Diagnosis of cancer means you no longer have to automatically die. There’s hope for all of us; hope for our future. I encourage you to make your own hope; that’s why we Relay each and every year,” she closed.

Later, as part of Friday’s traditional luminary ceremony where over 1,500 bag candles were lit in memory and honor of those touched by cancer, Ward led off that event by sharing a story of her four-year battle with a cancerous brain tumor.

“God got me through everything and I’ve had a lot of support from my family and friends,” the young teen continued. “I’ve met so many people along my journey. Some, I don’t even know, will tell me how amazing and how strong I am battling cancer.”

The treatments and their aftereffects have wrecked havoc on her education. She said she missed over 30 days of school in the past year alone.

“I know this may sound strange, but I would have never been this strong had it not been for having a brain tumor,” Ward noted.

“Just because you’re fighting cancer or have lost a loved one to cancer, that doesn’t mean they lost their battle, it means you just fight as hard as you can until the Lord calls you home,” she concluded.

Ward’s mother, Nikki – who, like Brinkley, is a registered nurse – praised her daughter’s courage.

“We found out about the cancer because she was complaining of severe headaches,” said Mrs. Ward. “I got into a nurse mode, but it was still hard as a mother to see your child fighting for her young life.

“She’s been so strong through this journey,” Mrs. Ward added. “She’s so positive. She could be having a bad day, but will put a good spin on it to make sure everyone around her is smiling. That’s what keeps me going; she keeps me strong because she keeps telling me that God will get us through this.”

The two-day, Hertford-Gates Relay for Life wrapped up on Saturday by raising nearly $160,000 in its ongoing effort to eradicate all forms of cancer. The event’s goal is $250,000 and this year’s local organizers feel they will reach that as there are numerous fundraisers planned between now and August (the time when the current Relay for Life annual period ends).