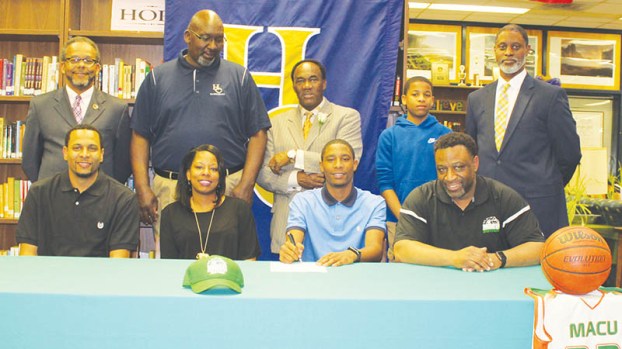 AHOSKIE – Termaine Totten – a basketball star at Reidsville High School – says he wanted his son, Talik, to wear his dad’s old number-24 when he started his prep basketball career.

Instead, Talik turned him down, opting to wear number-30.

Now, at the close of his high school playing days, the son will follow this time in his father’s footsteps, signing to play college ball beginning next season at Elizabeth City’s Mid-Atlantic Christian University.

Totten, who averaged 15 points per game (19 as a senior, when he was a three-point specialist) over the course of his four-year career with the Bears, will graduate from C.S. Brown STEM School later this spring. He had interest from Chowan and Winston-Salem State Universities in the CIAA, but chose the Mustangs – who play in the Norfolk, VA-based U-S Collegiate Athletic Association.

“They followed me since I began playing AAU ball (with the North Carolina Blazers) in the eighth grade,” said Totten. “I played with (MACU coach Allan Harris’) son, and he was there watching the game and they kept up interest in me through high school.”

A 3.0 student, Totten also drew academic interest from Pfeiffer, Mt. Olive, and NC Wesleyan, but decided on the athletic route. He has goals for his career at the next level.

“I want to show I can compete without fear,” he added. “I want to bring an intensity to the team, show them I can score and shoot the rock like I did (in high school).”

A shooting guard all of his playing days, Totten knows with his in-between size, he will have to spend some time at point guard, and that means adding more skills to his repertoire.

“I want to get (into point guard), so I can be more comfortable with the ball at all times,” he reasoned. “I’ll have to improve my passing, my ball-handling, my court vision, and basketball IQ.”

While his ambition is to play professionally, either in the states or overseas, Totten says he will major in sports management in college hoping one day to be a coach.

“He’s a gym-rat,” says Totten’s former high school coach, Charles Simmons. “He absolutely loves the game of basketball and he’ll work hard on both ends of the court, on offense and defense. It takes that type of kid to play on the next level.”

Totten’s future coach, Allan Harris, hopes the 5’ 11” sharpshooter can contribute right away and help turn around a program used to success, but dipped to 11-19 a season ago.

“We need him to create problems,” Harris said. “But we need him to do what he does well, which is to shoot. He’s a really terrific shooter because he hustles and I’m impressed with his desire.”

Though some may say the player is vertically-challenged, Harris says he sees no problem with Totten’s transition because the college game is no longer dominated by big men, but more with jump shooters – Talik’s specialty.

“We’re a Christian school,” he added. “We want our students to grow spiritually, academically, and athletically. (Talik) is spiritually grounded, he carries a solid GPA (grade point average) in the classroom, and he has the foundation.”

HOBGOOD – Three Ridgecroft School hurlers combined on an 8-0 shutout of Hobgood Academy on Monday, keeping the Rams in... read more