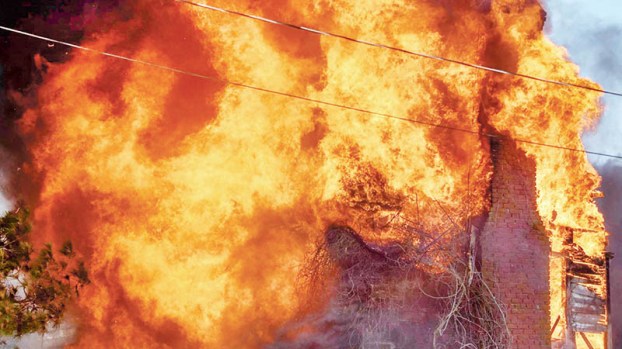 Several fire departments in Bertie County took part in a controlled burn of an old home on Sunday near Kelford. That practice injured a member of the Kelford Volunteer Fire Department. | Photos by Angie Todd

KELFORD – A Lewiston man is improving at Vidant Medical Center in Greenville where he is hospitalized after suffering injuries when a chimney collapsed on him near the completion of a control burn here Sunday morning.

James Pugh, an employee of the North Carolina Forest Service and a member of the Kelford Volunteer Fire Department, was reported in good spirits following surgery at Vidant on Sunday evening.

According to Kelford Volunteer Fire Department spokesman David Humphrey, the incident occurred sometime before noon on Sunday as fire units were executing a controlled burn.

“We were contacted by a property owner regarding the demolition of an old unoccupied structure that could possibly be used for fire training.” Humphrey said.

The building to be demolished was a wood-frame two-story house located at 3915 Governor’s Road in Kelford that was situated between two adjacent structures.

“There was no entry to the dilapidated house,” Humphrey added, “and we were asked to protect the other two buildings on either side.”

As the burn neared completion and the firemen were watering down possible flare-ups, only a portion of the two brick chimneys on either side of the home were all that remained standing.  As Pugh was in the process of removing some debris in proximity to one chimney, it collapsed. Pugh  – who was wearing full protective turn-out gear – was pinned under a pile of debris.

The firemen and paramedics immediately sprang into action, quickly excavating Pugh from beneath the rubble. As EMS units on scene performed emergency care, other EMS units arrived to treat Pugh before transporting him by ambulance to West Bertie Elementary School. A short time later an East Care emergency helicopter was dispatched, landed, and flew Pugh to Greenville for trauma care.

“The whole thing took between 15-to-20 minutes from when we made the call,” Humphrey stated.

Humphrey said a Fire Instructor from Roanoke-Chowan Community College was also on hand for the burn, and assisted as part of the training exercise so that firemen participating could receive training credit.

Approval to proceed with the burn had been given by the proper authorities.

Humphrey said Pugh had also been a member of the Lewiston-Woodville Volunteer Fire Department before joining Kelford.

On Monday a representative from the North Carolina Fire Marshall’s office visited the site and met with KVFD Chief Tim Emory to take a report and visit the accident site.

“We want to thank everyone who assisted us with everything that went on,” said Humphrey. “Obviously, we’re very concerned and a lot of prayers have been said for (Pugh’s) recovery.”

GATESVILLE – Gates County High School Arts students are stepping out of the comfort of their classroom zone this year... read more