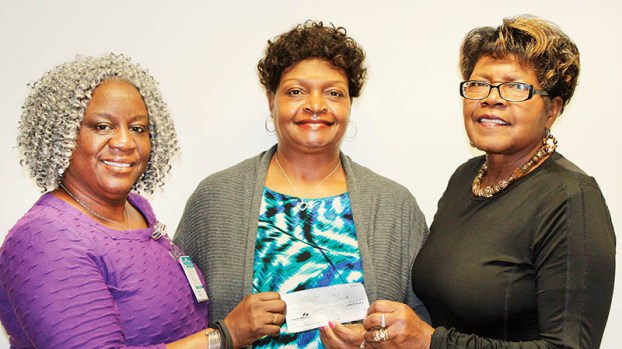 CONWAY – Craig Reid, also known as “The Messenger,” came up with the idea for “A Black and Purple Affair” held at Revelle Hill Baptist Church on Saturday, March 31. Reid worked with the church’s pastor, James C. Banks, and the evangelistic outreach chair, Cynthia Liverman-Vinson, to provide the opportunity to give back to the community. The focus of the event was to bring education and awareness to domestic violence. Reid decided to give back on his birthday and commit March 31, 2018 to promoting awareness.

Through this collaboration, “A Black and Purple Affair to STOP the Violence” Gospel Concert was held. The MC was Co-Pastor Jacqueline Riddick of H.O.P.E. Ministries of Winton. The guest speaker was Vera Hall-Reid who shared a profound testimonial of her story of living through a domestic violence relationship.

“I decided to no longer be a victim, but to be victorious,” said Hall-Reid.

She praised God for giving her victory to overcome and leave a bad situation. Her story was the highlight that brought true awareness of living in a domestic violence situation.

Blannie Hunt of Roanoke Chowan S.A.F.E. also presented and set up a booth of educational information. Hunt shared how the community can continue to support Roanoke-Chowan S.A.F.E. which is grant funded through donations of clothes for all ages, household items, pampers, wipes, baby food, donations to the thrift store in Ahoskie, and monetary donations.

Wendy Futrell, Chair of the Roanoke-Chowan Domestic Violence Task Force, also spoke. Board members of the Task Force were in attendance as well.

Admission for the event was free to the public. All donations from the March 31 event were given to Roanoke-Chowan S.A.F.E. The amount totaled $350.

CONWAY – Applications are now available to students from Northampton County for the Dr. Joseph A. Fleetwood, Jr. Scholarship. The... read more