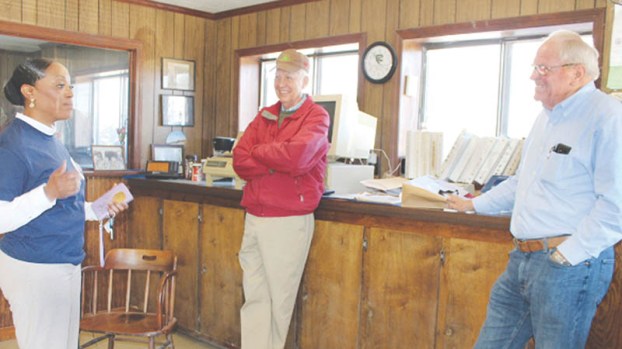 WINDSOR – The old idiom says ‘keep your nose to the grindstone, ear to the ground, and shoulder to the wheel’.

That’s certainly the formula Bertie County Schools Superintendent Dr. Catherine Edmonds is following as she began a ‘Listening Tour’ last week across the county she serves as its top educator.

This was also the first known tour of its kind in Bertie County.

“I feel like every time I go into a new position it’s very important to hear from the community,” Edmonds expressed. “It may look different, but getting out to talk with families and stakeholders is vital.”

Since assuming her office in February, Edmonds says it’s a ‘Listening Tour’ because at present she’s still learning about the district.

“I want folks to understand that I’m coming to hear from them,” stated Edmonds. “I may not have a lot to share out because I’m still trying to understand what’s going on.

“I am so appreciative of the time I spent Friday with the citizens and business owners in our communities,” she added.

Edmonds’ day began with a morning visit to several of Windsor’s top businesses: Powell & Stokes (Bertie County Peanuts) on US 17 North, followed by Basnight & Co. Building Supply on the US 17 Bypass.

As noon approached, it was on to Dolly’s Chat and Chew Café in Aulander for lunch, then a return trip to Windsor to Elite Performance Beauty Salon located downtown.

The afternoon drop-ins concluded with a trip to another beauty establishment, Speller Enterprises; and finally ending the day at Windsor Oaks Public Housing complex where she greeted students and parents just as school was being dismissed.

“My aim is to hear firsthand about how Bertie County Schools can better serve the youth and communities, and about how the communities can strengthen their support of those youth and the school system,” Edmonds said. “It takes all of us working together to better support our students, and to be able to create those conditions, we have to work together.”

Edmonds said that this marks the first of many stops in the community where she plans to gather feedback and input. She was guided on her tour by Windsor/Bertie County YMCA Director Casey Owens.

Edmonds says her Tour actually started when she began to network in meeting county commissioners, government officials, parents, students, and anyone who’s willing to talk with her.

“Casey has such a great connection with not just the community, but also with the children,” Edmonds acknowledged. “He was perfect because he works with kids and adults at the YMCA, and he was excited about the idea as well.

“Mr. Owens is very good about pointing out places where he thinks we need to stop,” she admitted.

In addition to Owens, the superintendent was also accompanied by Bertie County Schools’ administrative assistant Kimberly Cooper and communications specialist Amanda Bunch on the stops.

“I want to hear from the elders in our community,” she maintained. “The centenarians and those others who can share about their time because I think their rich history really helps support what we are trying to do now.”

“Being with and hearing from the community will benefit leadership in making strategic plans to offer the most we can for the students of Bertie,” Edmonds remarked. “We are so happy to strengthen these partnerships and uncover ways we can provide opportunities for growth.”

Edmonds’ ‘Listening Tour’ continued this week with stops in Lewiston neighborhoods because Edmonds feels it is important for to see where her students live. Then, it was on to Classic Kutz Barber Shop and Salon, followed by the basketball court at West Bertie Elementary School. The tour concluded with an evening of discussion at First Baptist Church of Kelford.

“After the first day on the tour, we all thought, how can we top this,” said Edmonds. “What I’m finding is that each stop brings new knowledge of things that the community believes work well in Bertie County Schools, areas of improvement, and critical needs and wants in our schools and communities.”

Edmonds says the intent is to keep the Tour as an ongoing strategy, moving forward, enabling her to learn how to better serve the communities and students of Bertie County.

Following the tour, Edmonds says she debriefs here staff on what was learned from the visits and then how to apply it for the good of education for the district.

She was reminded this was just the first day and first stops of her tours, and while she didn’t outline an agenda for the visitations, she did have a word of “caution” for citizens around the county:

“Be on the lookout for us to make a stop near you,” she observed.

If you would like to invite the Bertie County Schools superintendent to visit a business in the community, call Kimberly Cooper, Administrative Assistant, at the district office in Windsor at 252-794-6025.

Board of Ed to conduct interviews

WINDSOR – Four candidates have emerged as possible replacements for the District-4 seat on the Bertie County Board of Education.... read more