Bill attended Fork Union Military Academy, Wake Forest University and then joined the Army Air Corps.  He went to Primary Flight School in 1941, was commissioned in 1942, and retired from the 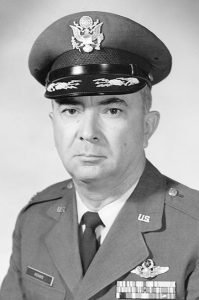 USAF as a Colonel in 1967. He was a veteran of WWII, Korea, and Vietnam. He was a pilot who flew bombers, as well as other planes (B17, B24, B25, B29, C45, and C47).  He was also in unconventional warfare and later strategic intelligence. After retiring he graduated from Rollins College at the same time his son, William Kyle Adams completed his MBA. He lived in Winter Park, FL since his retirement from the service.

Bill was the head of a very close knit and loving family.  He was a wonderful husband, brother, father, uncle, grandfather, and great grandfather. He was a true gentleman who was wise, kind, and generous. He lived a remarkable life and will be missed by all who knew him.

Bill was preceded in death by his wife of 71 years, Louise Adams; his daughter, Dorothy Adams; and his sister, Emilie Holroyd.

He is survived by two children, Kyle Adams and Margaret Bambrick; his five grandchildren, Rod Allan, Emily Roberts, David Roberts, Jennifer (Bambrick) Russo, and Jeffrey Bambrick, and their families. He is also survived by extended family and friends that were close to his heart.

A memorial service will be held Saturday, April 7, 2018 at 1:00 p.m. at Ahoskie United Methodist Church where he and Louise were married. Inurnment will follow at the Ahoskie Cemetery with Military Honors.

Donations in his memory can be made to the American Heart Association, Wounded Warrior Project, or Alzheimer’s Association.

Garrett-Sykes Funeral Service in is handling arrangements for the Adams family.