JACKSON – State Senator Erica Smith and NC House Representative Michael Wray spoke and answered questions from the Northampton Commissioners during their regular meeting here Monday. They spent an hour of the meeting discussing issues they’re currently working on as well as learning more about what the Board would like them to pursue further.

“We’re before you to discuss legislative goals and priorities as we move into our short session which will begin on [April] 16,” said Senator Smith after she greeted the Board. 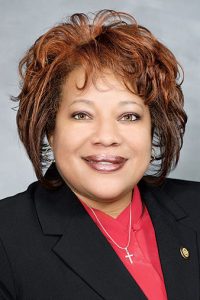 Smith had several points she covered during her portion of the presentation, including judicial redistricting, economic development, and K-12 education.

The possibility of judicial redistricting has been in discussion in the General Assembly for a few months already. As explained by the senator, the redistricting proposal would add Warren and Vance counties to District 6 which currently consists of Bertie, Hertford, Northampton, and Halifax counties. Smith thanked the Board for the resolution they passed in January opposing the expansion idea.

Prompted by a question from Chairman Robert Carter, Smith further elaborated on the potential effects of redistricting and how they would have to deal with them.

“What if the sheriff in Vance County has to drive all the way to Bertie County to get a signature on an order?” Smith said, mentioning different examples. “Even if you have the additional allocations of judges and ADAs (assistant district attorneys), it’s just going to be a monster of a process to be able to have court scheduling.”

“To me, it is unreasonable, it’s implausible to believe you can have these six counties in a judicial district and be able to afford the citizens the rights they deserve as tax-paying citizens,” she continued. “Can you imagine how long it’s going to take to bring their cases to trial?”

If the redistricting plan passes, Smith noted that they would fight to at least increase their allotted amount of superior and district court judges as well as assistant district attorneys. She explained that the bill is currently in the House, where Rep. Wray has spoken with the bill’s sponsor and advocated on behalf of their district.

Northampton County has consistently remained a Tier One county for several years.

“I just want to assure you that I will be working very hard to make sure we don’t have those false readings… that will cause us to be rated higher or less distressed than we really are,” she said, stressing the importance of accuracy. 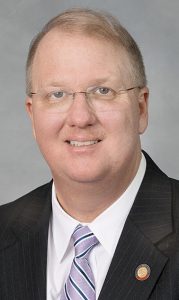 She concluded her presentation by briefly mentioning educational initiatives such as a program to help teacher assistants become certified teachers, the Teaching Fellows scholarship program which focuses currently on STEM teachers, and school construction by using lottery funds.

Representative Wray spoke after Smith, touching on a variety of positive goals that either have been met or they’re still working towards. He mentioned items such as working with DOT to take care of road issues, helping Seaboard fix a water filtration issue, helping secure $1.2 million in funding for sewer infrastructure improvements in Rich Square, and more.

“We’re your voice, and your concerns are our concerns. I’m here to listen to you,” Wray said. “You can’t move the mountain by yourself. We have to move it together.”

Wray briefly mentioned the need to make the internet more available in the area, and he emphasized the importance of working with small towns and supporting agriculture throughout the county.

Before Chairman Carter opened the floor for questions from the Board, Senator Smith quickly added a point she had forgotten to mention earlier. That was about the $58 million Atlantic Coast Pipeline fund which the NC General Assembly recently redirected to school systems located in the counties the pipeline will run through.

“The partners came together and allocated $58 million for an economic development plan as well as to mitigate any environmental damages,” she explained, adding that the money would have also helped bring more businesses to the areas around the pipeline.

The money was intended to be paid out over a period of five years with the amount being based on the impact to the communities. For Northampton, that would be based on the 22 miles of pipeline running through the county along with the compressor station that will be located near Pleasant Hill.

Instead, the money was redirected to school systems based on their ADM (average daily membership), Smith explained, which meant that larger populated areas such as Robeson and Cumberland counties would receive millions more in funding than Northampton.

Smith said she understands the need for more money in the educational system, but added, “but I don’t believe in hijacking a fund that was targeted to help with the environmental and economic impact of the Atlantic Coast Pipeline, and then diverting it to funding that we should already be appropriating to fix the class size.”

After their presentation was complete, Carter urged the Commissioners to share any goals they want the legislators to take back to Raleigh.

Commissioner Charles Tyner spoke first, asking what Senator Smith and Representative Wray could do for the citizens of Northampton County.

Wray explained that they were still working to improve several different roads in the county, and he tries to help people get in touch with the local DOT representatives when necessary. Smith added that they have to follow the specific process to get things done. She said she lives on a dirt road herself and understands the frustration of adverse weather conditions affecting the road.

“No, I can’t get my own road paved because it’s a process,” she emphasized that her position as a senator can’t simply change things overnight.

In response to Tyner’s question, Smith said she had been looking into grant opportunities that may have been missed by the county, particularly because they might not have enough funds for the required county matches.

“The bills I’m sponsoring surrounding economic development are to empower us to be able to better meet the criteria… so that it will work in eastern North Carolina,” she explained.

“You’ve got to have a business plan,” Wray agreed.

Commissioner Fannie Greene said she appreciated Smith and Wray keeping them informed on the redistricting proposal. She also implored them to keep working to help improve the roads, especially because the county does not have the funds to maintain private roads.

“It would be great if you can help us there,” Greene said.

Commissioner Geneva Faulkner’s question primarily concerned expanding digital infrastructure within the county. She mentioned that many citizens rely on their cell phones solely for internet access, but certain parts of the county have poor cell service.

“It’s hard to share a photo, not to mention download a video to watch to help with homework,” she said, emphasizing the impact this has particularly on education.

Both Smith and Wray agreed about the need for better internet access within the county, particularly in regards to improving children’s education, providing online training and certification for skilled workers, and even providing better access to online banking. They said they would keep pushing for improvements.

Chairman Carter wrapped up the session by thanking the legislators for making the time to talk with them.

“It’s really important to hear from you all too,” Wray said in conclusion. “That really matters a lot.”