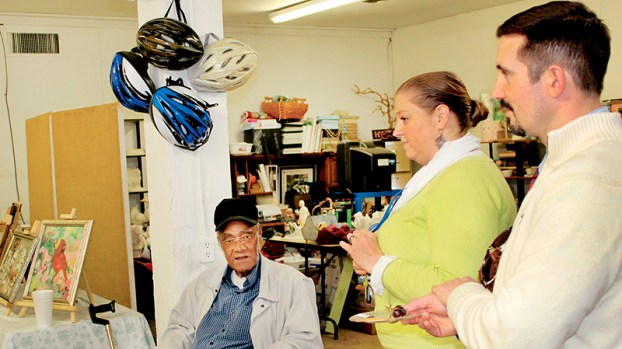 Therman Powell (seated) chats with two individuals who were in attendance on March 22 at the Cultivator Bookstore in Murfreesboro where a sampling of Powell’s artwork is on display. Staff Photo by Holly Taylor

MURFREESBORO – Two artists from Northampton County currently have their work on display at the Cultivator Bookstore in Murfreesboro. The art show, which opened with a reception on March 22, will host the works of Therman Powell and Leroy Edwards until April 21.

The exhibit is set up in the back of the bookstore in an open space with enough room to display both Edwards’ watercolor paintings and Powell’s wooden sculptures.

While Edwards was unable to attend the opening reception, his paintings still adorned the walls for visitors to enjoy. Much of his artwork features beautiful nature scenes with bright flowers and colorful animals.

Cultivator co-owner Caroline Stephenson explained that Edwards, who is from Jackson, had very little formal art training. He attended Tuskegee Institute to learn machinery and welding, and only continued art as a hobby.

Powell, who lives in Seaboard, said his art skills were self-taught. He first started creating things out of wood in 1999 after a stint in a rest home recovering from sickness.

“I came out, didn’t have anything to do,” he said simply.

So that’s when he turned to building anything and everything that pops into his head. He produced model versions of trucks, houses, pig cookers, woodstoves, and much more.

“Most anything that comes in my mind, I do,” he continued. “I see something I want to make, I just look at it.”

Powell said it doesn’t take him long to create something—even a complex dollhouse takes only a couple of days. But sometimes his art takes longer to complete because he likes to jump around from project to project, working on whatever’s at the forefront of his mind at the time.

Pine is Powell’s wood of choice because he said it’s softer and easier to trim than a hardwood, like oak. He occasionally incorporates other materials into his creations too. One time he made a wooden turtle which would have remained incomplete, but he eventually found a bicycle helmet to use as the shell.

Within the exhibit, there’s also a sculpture of a few figurines made of spoons and forks. The tiny silverware people are posing with instruments and a microphone, looking like they’re ready to perform. When asked about the inspiration for that piece, Powell said he thought he’d seen something similar on TV years ago. He just tried to recreate it in his art.

Many of Powell’s pieces are based on old memories, like the miniature woodstove he remembers from his childhood or the red-roofed model school building just like the one he attended.

While the Cultivator art exhibit showcases many of Powell’s works, there are more that he didn’t bring to display, and there are more he said he already has plans to make. And it’s not all artwork either. One of his ideas includes making a working washing machine by repurposing old parts like an oil drum and a bicycle gear.

When asked how he felt to have his art on public display for the first time, Powell answered simply that it felt good.

“It’s just something I love to do,” he said, summing his artwork all up with one sentence.

As visitors walked through the room to view the works of both Powell and Edwards, Stephenson said she was glad the bookstore was able to provide the opportunity. Both men, she noted, never made a living from art, but have been able to explore their artistic talents after retirement.

“We’re incredibly proud to have the work of these local gentlemen on display here. They’re so very talented, and we’re glad to share their work with more people,” she said.

The art show is open until Saturday, April 21, and several of the items on display are for sale. Cultivator Bookstore is located at 301 East Main Street, Murfreesboro. The store is open Tuesdays through Saturdays, but hours vary. For more information, call 252-395-2327.