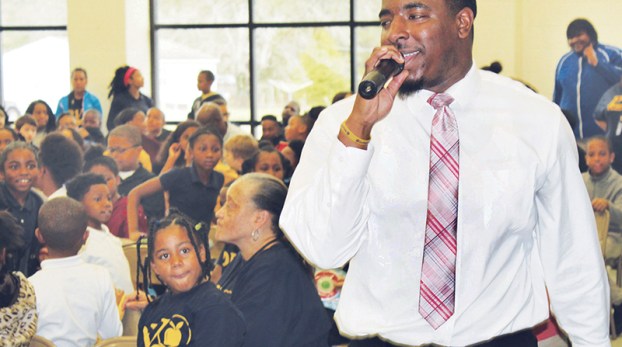 That’s what Darius Wesson believes, and he’s used that motivation from his Bertie County upbringing, to Bertie High School where he was a three-sport athlete, through college at Elizabeth City State University, and now on into his burgeoning business life as an entrepreneur.

“It kind of all began with a T-shirt order,” he laughs as he shares that recollection.

Wesson, now studying finance in Ohio, wanted to come home for his birthday on March 21. But instead of the usual cake-and-candles and family kisses, he wanted to leave up north with something more soothing, and bring south with him something more lasting ….

And that’s exactly what the rolling ball of synergy did at Riverview Elementary School’s auditorium in a special assembly held during the school’s Attendance-Spirit Week.

Wesson took to the stage and seated before him was a sea of elementary school pupils and their teachers adorned in special T-shirts. As the students seemed to feed on every word, he then proceeded to present a motivational speech after which he waded into the crowd to mingle with his audience.

Meanwhile, backstage, behind the curtains were a couple of former schoolmates who’d helped with the arrangements.

“We were in school with Darius at Elizabeth City State and we thought about what we could do to promote positivity for this week’s assembly throughout the school.”

While he’s been in Ohio, Wesson reconnected with another former ECSU Viking, and eventually decided to go into business together with Dante English, who also has roots in the Roanoke-Chowan area of Aulander. The pair then hit upon an idea of selling T-shirts among other party clothing and social paraphernalia. But they didn’t want to sell not just any comfort garment with a message scribbled on the back or front; these two wanted their shirts to have purpose.

“With a lot of things going on in the world, there’s been a lot of negativity,” Wesson expressed. “So, my friend and I came up with the idea for this because if you think positively, then positive vibes come out.”

The T-shirts are solid black with light-colored lettering silk-screened on them that read: “P-V-O”, for ‘Positive Vibes Only’.

“This was the first time anyone had wanted a bulk order for a school,” he added. “So we wanted to use the opportunity to come and speak with the kids to tell them what positive vibes are all about.”

In keeping with the theme for that week, Wesson thought this presentation would fall right in line with the message he wanted to deliver: uplift, with positivity.

“(Some) kids may come from bad households, some don’t come to school at all, and sometimes when they do come they exhibit bad behavior,” Wesson related. “So we wanted to give them something to make them think positive and do the right thing.”

But before all this could happen, Jenkins and Harrison were communicating with their former schoolmate and then broached the idea of ‘shirts for Spirit Week’.

“I said it would be a really great if we could get T-shirts and wear them for assembly that week,” Jenkins said. “Everyone thought it would be a great idea, so I called him and asked him if he could do an order for 200 T-shirts.”

That’s when the phones began to buzz.

“It was the biggest order we’d ever had,” Wesson exclaimed. “We might have had 10 or 15, but this was really huge.”

The business partners outsourced some of their order to meet the deadline and they also knew there would need to be some concessions made to accommodate the school.

“Coming from the 252-area, and being familiar with the economy is we knew we couldn’t charge the same thing we would for usual retail,” Wesson acknowledged. “So we looked out for them and we were able to come through. It wasn’t about the money, but marketing and showing our face to spreading the positive message.”

Wesson even found a few customers who were at the school but not a part of the original order.

“People have been coming up wanting the email and the web address,” he said. “They want to get on the list. There’s still opportunity, but I’m not going to make this more than what it is since this is our first time. I plan to move back to Carolina one day, and this will just help us out.”

With his foothold established, Wesson then added the motivation element to his exposition, and the school, the business venture, and everything else related to a positive experience fit right in.

“Even if you just come and talk about things like being on time, using your time wisely, being positive in everything you do, that would be enough,” Jenkins said. “And he came back with having his speech all ready, and everyone was ready to go.”

MURFREESBORO – Two artists from Northampton County currently have their work on display at the Cultivator Bookstore in Murfreesboro. The... read more