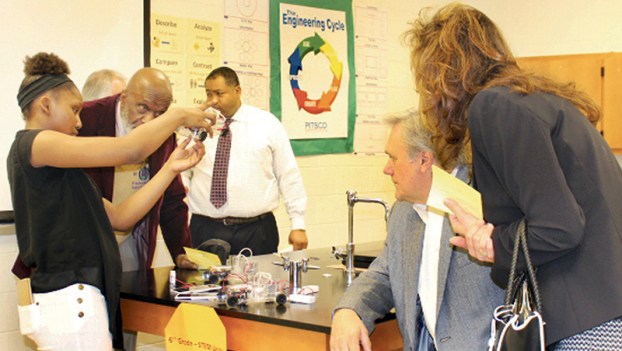 Bertie Middle School was recognized for an academic milestone last week (March 22). Thanks to the Pitsco STEM Program – a part of Pitsco Education, headquartered in Pittsburg, Kansas – Bertie Middle School has the only pilot study site for this special STEM program this year. It also has the distinction of being the first of its kind in the entire state of North Carolina.

To celebrate the distinction, an evening of learning and engagement in the form of an open-house was held Thursday evening at the school.

The STEM Laboratory classes at BMS are taught by Latisha Freeman and Jacqueline Thompson.

“They provide students with positive and challenging learning experiences every day,” Freeman said. “These are experiences that are non-traditional and that require a shift in thinking for both staff and students alike.”

Matt Frankenbery, Vice President for Pitsco Education, explained to attendees, including county commissioners, school board members, students, parents, Bertie County Schools employees, and more, that STEM classes at BMS are not actually four separate classes; but rather, each element is blended together to solve real-world problems, no matter how challenging.

The goal of the Pitsco STEM program is to build relationships with school districts and put programs of this type into schools all across the country.

Pitsco partners with The William and Ida Friday Institute at NC State University, which studies educational success across the state.

“Pitsco’s student-led labs are engaging and challenging learning experiences that require the synergy of using science, technology, engineering and math simultaneously to solve real-world problems,” said Frankenberry. “They are also designed to make students explore careers that use the same types of skills.”

During a hands-on demonstration titled, “Expeditions,” students create their data, capture their data, and show all of their work in log books every day.

The students also work with partners, and their aim is focusing on what Pitsco considers the four C’s: collaboration, creativity, critical thinking, and communication. 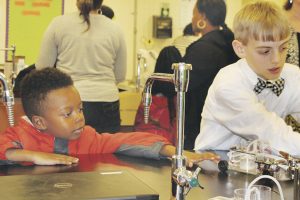 A Bertie Middle School student (right) prepares his robotics demonstration as a curious onlooker notes the details during the Pitsco STEM Open House held at Bertie Middle School. The program is the only one of its kind in North Carolina schools. Contributed Photo

“STEM students learn perseverance; that you don’t quit if you fail the first time. The STEM labs are also building a better employee for the future, an employee who will show up and do the hard work required in the work force of today,” said Frankenbery.

“It’s been proven that the STEM expeditions in the Pitsco labs help to boost science scores,” he added. “At the end of the school year, a comprehensive study will be completed on the successes we’ve had at Bertie Middle School.”

Thompson noted that it’s the enthusiasm and successes of the students, along with administrative support that’s both inspirational and motivational.

“The students dig in and do the expeditions,” she said. “They want to be in class and they are liking what they’re learning.”

“And some of those who are not in the classes want to be in them, too,” she acknowledged.

Each “Expedition” is tied to a career, and some students are already revealing aspirations to become workers in certain fields, based upon what they are learning and doing in the STEM Labs.

After a welcome delivered by BMS seventh grader Allen Foy, Frankenbery gave an overview of Pitsco STEM Education followed by Freeman and Thompson, the two lab facilitators, discussing the success of Pitsco at Bertie Middle.

Following those presentations, the audience was divided into two groups spending equal amounts of time in each STEM Lab.

Students showcased their “Expeditions”, which included testing water and soil variables with organic seeds; antibiotics and “good” and “bad” bacteria; water filtration; robots that operate by water; and geothermal energy, just to name a few.

Bertie County Schools are involved in another project with NC State University coming in May when Bertie Early College High School (BECHS) hosts its sixth annual Biotechnology Symposium on May 7.

“This is an ambitious program, supported by the Burroughs Wellcome Fund,” said Boller. “We’re teaching 21st century STEM job skills to high school students and connecting them to two of the most important parts of the North Carolina economy: biotech and food production.”

The students did the laboratory work,” Boller added. “What started out as a teacher-led lecture session was directed around me; but I said I wanted my kids to have the center of the whole thing. It was all about them doing their work.”

“This year’s students have worked hard to build on the progress of their previous cohorts, and they are all very excited and proud to show off what they have learned,” he added.

Twice annually, a dozen BECHS students have the opportunity to enjoy the experience of a lifetime at a “biotechnology boot camp” run by Boller and Dr. Matt Koci, associate professor in the Prestage Department of Poultry Science at NC State’s College of Agriculture and Life Science.

“The goal of the week-long camp was to give students from one of the poorest counties in the state a rare opportunity to dive into college-level science at one of the best universities in the nation,” Koci stated.

“I told them that by time they finish one year of this program, they will have more microbiology and biotechnology experience than most Masters students coming out of NC State,” he concluded.

End of the road

WINTON – Nearly 14 years after its formation, the road ends for the Hertford County Public Health Authority (HCPHA). At... read more