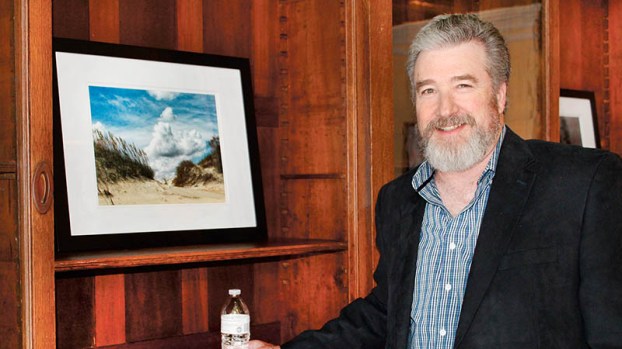 Chowan University professor Tom Brennan stands with one of his photographs currently on display at Revelle Realty in downtown Murfreesboro. Shown below is another example of his work – part of Brennan’s “East of 95: Passport Not Required” collection. | Staff Photos by Holly Taylor

MURFREESBORO – “East of 95: Passport Not Required” is the name of the latest art show to grace the walls of Revelle Realty in Murfreesboro. An opening reception was held here on March 22 for people to view the exhibit and meet with the photographer Tom Brennan.

“All of this is from eastern North Carolina,” said Brennan of why he chose the name for the exhibit. “It’s not single-focused like on houses or farmland. It’s just anything and everything that can happen.”

The photographs range from featuring Wanchese fishermen going about their daily work to scenic nature shots capturing images of life farther inland. Brennan, who commutes from his home in Edenton to his job at Chowan University each day, said many of the photographs come from his drive up and down Highway 45.

“It’s an hour drive from Edenton to Murfreesboro. It usually takes me two hours,” he said with a 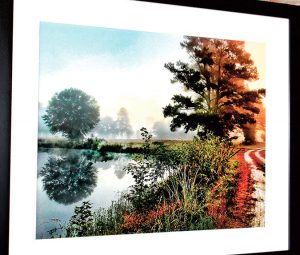 laugh, explaining that he enjoys watching the landscapes change with the seasons and he stops to snap a photo whenever the lighting is good.

“It’s the quality of light that always intrigues me. Eastern North Carolina has just an incredible beautiful quality to the light in the morning and the evenings,” he added.

Brennan’s love of photography was sparked at a young age by his grandmother, who also enjoyed the hobby. Later as a student at Clemson University, he had the opportunity to take some photography classes, from there meeting people who would become his mentors in the field.

“I had a lot of formal training in terms of working with some really great photographers who taught me a lot over the years. I was really fortunate to meet some really fun people, some really talented people too,” he acknowledged.

It took some time, however, to make the jump from film to digital photography, Brennan admitted. He was used to having a dark room for over 25 years in his home to develop and work with his photographs, so when things started going digital he decided to take a step back from photography for a while.

“I didn’t get it,” he explained. “I was so into film, and the quality of film and paper, I had a hard time accepting that digital would be good quality.”

But eventually he made the transition. Now he uses an iPhone to capture a majority of his shots, and he’s familiarized himself editing software like Photoshop and Snapseed to enhance the quality of his photos. He said he typically doesn’t do a lot of heavy editing. It’s usually just a simple enhancement of the contrast to bring out more details of the image.

More important than the technical details, however, are the stories within the photographs. While talking to people visiting the exhibit, Brennan shared the stories behind each shot. The exhibit features, for example, two photos of a snowy egret dancing through water on the beach. Brennan described the bird as “acting like a young teenager” having fun running around like that.

“It’s like he was showing off for us,” Brennan smiled.

The egret photos were just one subject of many on display. Others showcased rows of corn during peak growing season, misty mornings on a quiet backroad, and billowing clouds hanging over ocean waves, just to name a few.

Brennan said his biggest challenge getting ready for the art show was simply deciding which photos to include. He admitted it had been a long time since his work was featured in a show, so he felt a mixture of both nervousness and excitement.

“I’m honored and delighted that it’s going to be up here for a couple months too. That’s very exciting,” he added. “I’m humbled by the experience.”

The “East of 95” show will be on display at Revelle Realty until June 1. People are welcome to stop in during normal business hours to view the art. The business is located at 129 East Main Street, Murfreesboro, and open from 10 a.m. to 2 p.m. Monday through Friday. For more information, contact owner Elicia Revelle at 252-396-1244.

Revelle began featuring art exhibits in her realty office almost a year ago, and she said it continues to be a positive experience.

“Every time has gotten a little bit bigger,” she said. “We have new people coming each time. I think it’s been a really good thing for the community. People say they are just excited to have something, a place for the artists.”

All of Brennan’s works on display are for sale. And people only have to travel as far as Murfreesboro to see them: no passport necessary.