Trenton White twirled a two hitter for the win on the mound.  He had a no-hitter through the first five innings and his teammates backed him up with five big runs. Alden Cottle drove in a pair as six batters accounted for Falcon hits.

“I can’t say enough about how proud I am of this team,” said an ebullient Bertie coach Bobby Harmon after the game. “The last three games they have really bought into what we are trying to do.  They are playing together and not individually.” 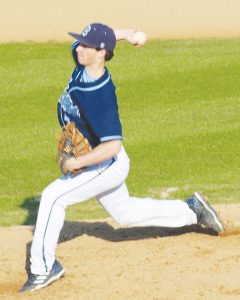 Bertie opened the scoring with a pair of runs in the bottom of the first inning. With two on, Jared Speight and White, Cottle drove a hard shot to left field scoring Jared Speight, but White was thrown out at home. Caleb Damo then stroked the only extra-base hit of the game, a double to left that scored Cottle. Bertie had a 2-0 lead after one complete.

White, meanwhile, was mowing along – getting three up-and-three down, except for one Panthers runner that reached on a fielding error.

North Pitt got on the board in the top of the sixth, scoring on a one-out single before White got out of trouble with a pair of groundouts.  White later hit a batter to put a man on in the top of the seventh, but retired the next three in a row to post the win.

“Trenton on the mound and Scoop behind the plate were pretty special,” added Harmon. “T (Trenton) was in a zone tonight and you could tell him and Scoop were on the same page.  We played great defense behind him and offensively we came through with some hits; this is a good way to head into conference play.”

MURFREESBORO – The Chowan University baseball team rallied twice – including once from 10 runs down – and in the... read more