MURFREESBORO – The Chowan University baseball team rallied twice – including once from 10 runs down – and in the process completed a two-game sweep of Lincoln University (PA) here Sunday afternoon.

The Hawks won by scores of 11-10 and 6-5, respectively; capping the first-game rally thanks to a walk-off RBI single by Harry Markotay in the bottom of the seventh inning that caged the Lions.

Lincoln led 10-0 after an inning and a half, feasting on Chowan pitching with eight hits and a pair of Hawk errors. 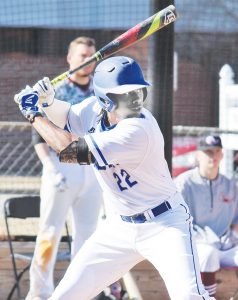 Chowan University’s Marquise Lanier (#22) drove in a pair of runs in the second game of a double-header allowing the Hawks to complete a two-game sweep of Lincoln, PA Sunday at Hawkins Field by scores of 11-10 and 6-5. | Photo by Qui’Wania Miller

In the bottom of the second, Chowan scored three runs. Nick Rose and Robert Williams coaxed back-to-back walks before Rose scored on a Tyler Jones RBI double to right-centerfield. Williams later scored on a sacrifice fly by Trenton Lee, and Jones scored on an RBI double by Markotay.  The Hawks trailed by seven, 10-3.

Chowan picked up five more big runs in the bottom of the third. Julian Lopez was hit by a pitch, Rose reached on an error, and Williams walked to load the bases. Lee then got a bases-loaded walk for on RBI and Anthony Jefferson was hit by a pitch to bring in another run. Markotay then grooved one into the gap for a three-run double and the Lions lead was down to two, 10-8, after three.

It was a one-run game after four complete innings when Chowan picked up a run on a Trent Brosdahl RBI double that made it 10-9 in the bottom of the fourth.

The tying run came in the bottom of the sixth on a Brosdahl sac-fly, knotting it at 10-all after six. The game winner then came in the seventh when Markotay stroked one to left field on a full count.

Chowan had six hits; Markotay had three of them, and drove in five runs. Williams, Brosdahl and Jones had the other Hawks hits.  Trenton Lee got the win in relief, as Will Edwards, Ryan Gallaccio, and Daniel Whitener also pitched.

Marquise Lanier came through in the second game with a two-run single in the bottom of the sixth that erased another Lincoln lead and produced a 6-5 win.

The Lions opened with two runs in the top of the third inning, leading 2-0 after three.

Chowan scored four runs in the bottom of the fourth. Rose and Williams both walked, Brosdahl reached on a fielder’s choice. Rose was able to reach third and scored on a Corey Bolam RBI infield single.  Brosdahl scored on a Nick Lees RBI single to left as Bolam and Lee advanced into scoring position.  Jefferson got an RBI single and Markotay a sac-fly to produce the other two runs and a 4-2 Chowan lead after four complete.

Lincoln went back in front with three runs in the top of the fifth and led 5-4 after five.

In the bottom of the sixth Jefferson and Markotay stroked back-to-back base hits before Lanier’s single to centerfield that scored both runners. Lincoln failed to score in the top of the seventh, and the Hawks had completed the sweep.

Chowan had 11 hits. Lanier, Williams, and Jefferson had two each while Markotay, Lopez, Rose, Bolam, and Lee had one hit apiece.  Vinny Puma got the win, his second, in relief of starter Bailey Lipscomb.

Chowan improves to 11-12-1 with the sweep while Lincoln is winless on the season at 0-11.  The Hawks travel to UNC-Pembroke today (Tue.) for a doubleheader beginning at 2 p.m.

AHOSKIE – Trevor Lee and Alden Lassiter combined to pitch a one-hit shutout and the Bears banged out a season-high... read more