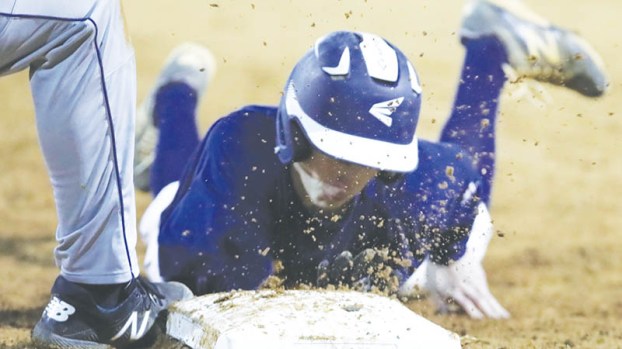 Alden Lassiter dives safely back to first base on a pickoff attempt in a Hertford County baseball game this past week. The Bears finally broke through to the win column with a 14-0 shutout Thursday over Northampton County. | William Anthony Photography

AHOSKIE – Trevor Lee and Alden Lassiter combined to pitch a one-hit shutout and the Bears banged out a season-high 14 hits as Hertford County beat Northampton County 14-0 here Thursday afternoon.  It was the Bears’ first baseball win of the season.

Hertford County opened the scoring in the bottom of the first inning as they sent 17 batters to the plate and 11 of them crossed the dish. Tyrek Beverly opened with a double into the gap in right centerfield and scored on Alden Lassiter’s RBI single.  Lassiter would score on an Edward Bradley RBI double before Harrison Spence singled home Bradley. Keyshawn Lassiter, running for Spence, scored when Javier Correa reached on an error. Parker Bradley reached on an error and Jaylan White walked to load the bases. Beverly was hit by a pitch for the fifth run, and both Parker Bradley and White scored on Alden Lassiter’s single.  After re-loading the bases, Beverly scored on an error and the ‘hit parade’ continued with Trent Munford, Spence, and Correa driving in runs. With the scoreboard nearly exploding, the Bears had strung together 11 runs to lead by as many after just one inning of play.

Hertford County got its final three runs in the bottom of the second on RBI’s by Alden Lassiter, Munford, and Spence.

In the top of the fourth, the Jaguars finally got a hit, a double by Jaquan Copeland; but it produced no runs, leaving it 14-0 after four complete. The Jags’ last chance came when Malik Robertson reached courtesy of a two-out walk, but he too was stranded thanks to a strikeout that ended the game.

Lee pitched three innings for the win: no runs, no hits, and seven strikeouts. Alden Lassiter pitched the last two allowing no runs, one hit, and he had six strikeouts.  Darren Daye (losing pitcher) and Robertson pitched two innings each for Northampton County.

Hertford County had 14 hits, three each by Alden Lassiter and Spence, two apiece by Beverly and Munford, while Edward Bradley, Correa, White, and Lee each had one safety. Copeland had the lone hit for the Jaguars.