A graduate of Conway High School, Dan attended Chowan College in Murfreesboro and was, later, to 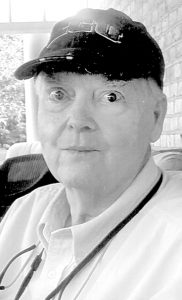 He became active in the organizations and activities of Murfreesboro and Hertford County, becoming Chairman of the Hertford County Republican Party for many years and having memberships that included the American George Lodge in Murfreesboro. He served several terms on the Murfreesboro Historical Commission and with his love of history he enjoyed the restoration of several of the old buildings in town. He loved being apart of Civil War reenactments and even helped prepare for the docking of the ship, Elizabeth II when in came to our area. He was a very patriotic man who truly loved America.

The family will be receiving friends at Bridgers Funeral Home, Inc. in Conway on Thursday, March 22, 2018 at 10 a.m. and Daniel Thomas’s graveside service will follow at 11:00 a.m. in the Town of Conway Cemetery.

The family has requested that anyone wishing to share a memorial gift, please do so to the American Cancer Society in care of A C S McConnell – RAAB  Hope Lodge, 930 A Wellness Drive, Greenville, NC  27834.

Bridgers Funeral Home, Inc. in Conway is in charge of arrangements.