Blake was a loving husband, father, son, brother, uncle, and friend. He brought much joy and laughter to those around him and will be greatly missed by all who were fortunate enough to have known him.

Blake was born at Halifax Memorial Hospital on April 21, 1977 to Rick and Jo Anne McGee. He is 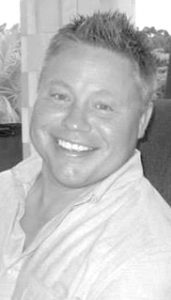 survived by his parents; his wife, Tricia Ann McGee; his two children, Olivia Blake McGee and Jaxon Matthew McGee; and his brother Trent, sister-in-law Lauren, and niece Emery. He also leaves to cherish his memory his aunts and uncles, Debbie and George McGee and Linda and Donald Parker; and his cousins, Lynn Flanagan, husband Scott and daughters, Holli and Mallory; Mark McGee, wife Danielle, and daughters, Avery and Anna; Melissa Meyer, husband Kevin, and children Elsbeth and Lane; and Greg Parker and wife Heidi.

Blake was preceded in death by his grandparents, Mr. and Mrs. Richard McGee and Mr. and Mrs. Jennings Johnson; his niece, Adelyn Jane McGee; and his cousin, Hinton McGee Meyer.

Blake was a proud graduate of the University of North Carolina at Chapel Hill. He was a lifelong UNC fan and member of the Rams Club. Blake could often be found cheering on the Tar Heels at Kenan Stadium or in the Dean Dome. He also loved to read, play golf, and go to the beach. Above all, Blake was a wonderful, loving father who found great joy in spending time with his wife and children.

A funeral service will be held at 2 p.m. on Friday, March 23, 2018 at Apex Funeral Home Chapel, 550 W. Williams Street, Apex, NC 27502. The family will receive friends immediately following the service. A private burial will be held at Woodland Cemetery in Woodland, NC.

In lieu of flowers, the family requests memorial contributions be made to the Juvenile Diabetes Research Foundation; or the March of Dimes – Team Adelyn’s Hope.

Condolences may be sent to www.ApexFuneral.net.