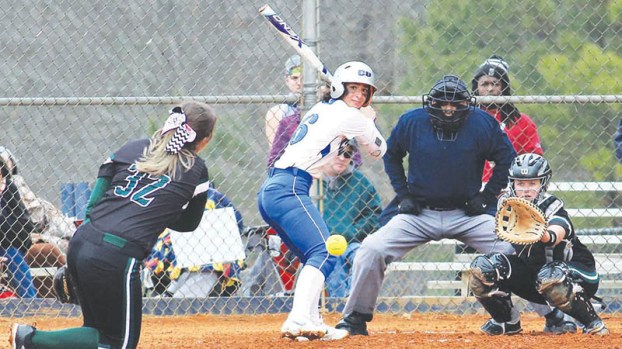 Chowan University’s Donya Salman (at bat) was part of 43 hits the Hawks softball team strung together during their five games at the Salem (VA) Tournament this past weekend with Chowan winning four. | Photos by Qui’Wania Miller

SALEM, VA. – The Chowan University softball team wrapped up the Salem Tournament in Virginia last weekend going 4-1. The Hawks dropped their first contest to Gannon University on Friday, but swept their next quartet of games helping head coach Brian De Witt pick up the 100th win of his coaching career.

De Witt earned CIAA Coach of the Week honors for that feat while two of his players, Shelby Griffis and Molly Rosenthal, were Pitcher and Defensive Player of the Week, respectively.

Starting off Saturday, Griffis tossed 12 innings on the afternoon to pick up two wins against Bloomsburg (8-4) and Edinboro (9-1), allowing five runs (four earned) and striking out eight batters.

Rosenthal, Beth Walker, Brittany Parson, Haley Cooper and Kelsey Sonntag produced the power for the Hawks with home runs on the day. 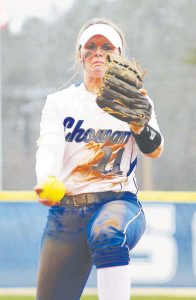 Pitcher Shannon Buchanan’s face shows the all-out effort the Hawks displayed as she won her fifth game of the year during the event.

0.  Kris Neal led off the contest with a single and moved to third on a stolen base and wild pitch.  Cooper walked as Neal came home on a passed ball while Walker gave the Hawks a 3-0 lead with a two run home run.

After the Huskies scored two runs in the third, the Hawks answered with five runs in the bottom of the inning to lead 8-2 before Bloomsburg added runs in the fifth and seventh innings closing the gap to the four-run final.

Against Edinboro, Rosenthal extended the 1-0 Hawks lead with a one-out home run in the bottom of the second inning.  Miranda Glover reached on an error before coming around to score on a Neal double.  Cooper then hit a two-run home run to center field to push the advantage to 5-0.

The Chowan lead would swell to 7-0 in the bottom of the third inning before Edinboro broke up the shutout in the top of the fifth inning closing the gap to 7-1.

Against West Liberty, Parson put the Hawks on the board in the top of the second inning with a home run.

In the third inning, Lindsey Stigler hit a sacrifice fly following a ground out to score a run, and after Parson singled she would come around to score on Kelsey Sonntag’s home run.

The Hawks would add three runs in the fifth inning to lead 7-0, and the lead would grow to 8-0 in the sixth before the Hilltoppers scored twice in the bottom of the inning.

West Liberty looked to make a comeback in the bottom of the seventh but a double play ended the threat with the Hilltoppers falling 8-5.

Finally, on Sunday, Stigler paced the Hawks with three hits and four RBI in the East Stroudsburg contest.

East Stroudsburg broke a scoreless tie in the bottom of the second before Chowan responded in the top of the third inning to even the contest at 1-all.

The Hawks would take the lead in the fourth inning before adding to it in the fifth when Stigler hit a three-run home run to put the Hawks up 5-1 before winning 6-2.

A double-header against Mansfield was cancelled yesterday (Wed.) due to wet grounds, so the Hawks now shift their focus to the CIAA Round-Up this weekend, March 16-18 in Elizabeth City, hosted by Elizabeth City State.

BETHEL – North Pitt High School rallied with four runs in the sixth inning and went on to down Bertie... read more