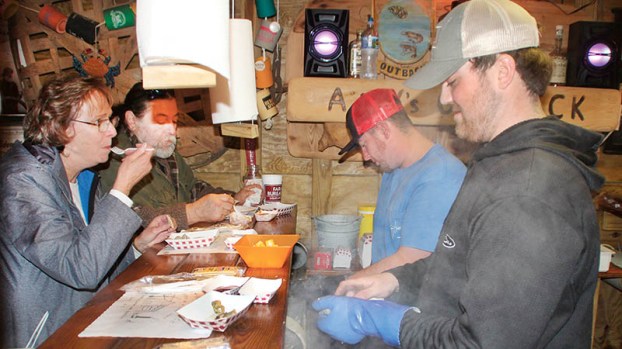 Carter Askew (foreground, right) joins with Ryan Hendrix (background, right) as they shuck steamed oysters during the March 3 fundraiser at A & W’s Outback, an event to benefit the Bunkhouse Fund at Camp Cale.

EURE – In the very near future, local youngsters attending Camp Cale in nearby Perquimans County will have a new bunkhouse to lay their heads at night.

Among the benefactors making that dream happen are those attending or sponsoring a March 3 fundraiser in Gates County.

Ann and Wade Askew hosted that event at the famed A & W’s Outback, an oyster bar located behind their home on White Oak Road. There, approximately 125 guests feasted on steamed oysters and shrimp, filled bowls with delicious homemade clam chowder, and enjoyed other items on the menu – to include chicken wings and ham biscuits. 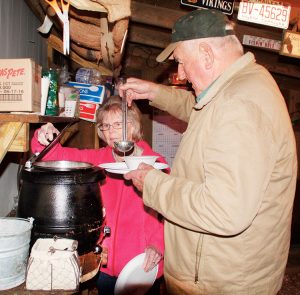 With his wife, Joyce, holding the lid, Perry Eure scoops up a piping hot serving of clam chowder at the Camp Cale fundraiser.

In the end, nearly $7,770 was raised for the Camp Cale Bunkhouse Fund.

Camp Cale, located on nearly 90 acres along the Perquimans River, is home to a youth and teen ministry during the summer months. It was founded in 1961 and is operated by the Chowan Baptist Association.

“It’s a wonderful place for our children to learn faith-based values and the teachings of Jesus Christ,” said Ann Askew.

“We are aware and supportive of foreign missions through our local churches, but we need to realize the importance of local missions, especially when it comes to our children,” she continued. “Camp Cale is a perfect place for our children to be led towards Christ. What they learn during those weeks of summer camp they can bring home, share it with their friends and family and perhaps lead them to Christ as well.”

“If one child is saved, gives their life to Jesus because of attending Camp Cale, then all the effort we put into this fundraiser was worth all the hard work,” stressed Wade Askew.

The Askews, who attend Eure Baptist Church, are well known for giving back to their community. They previously hosted two similar fundraisers (one on 2014 and the other two years later) to benefit GEMS (Gates Emergency Ministries – a local food bank).

“Our pastor, Wayne Proctor, who also serves as the chairman for the Cale Management Group, asked Wade and I last year would we consider hosting a fundraiser for the bunkhouse project at Camp Cale,” Ann Askew said. “We put it together for this year and had a great turnout. We appreciate all those who came out and supported this special project.” 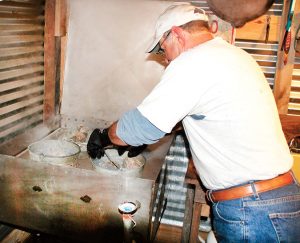 Wade Askew checks on several buckets of steamed oysters that were served to the patrons of the Camp Cale Bunkhouse Project fundraiser on March 3 at A & W’s Outback, located near Eure.

Figuring in all the corporate sponsors and in-kind sponsorships, the event grossed in excess of $10,000. Of that amount, $7,695 (after all expenses to stage the event were paid) was donated to the Bunkhouse Fund.

According to Dr. Proctor, the bunkhouse project will cost $750,000 to complete. It will add to the growing list of facilities at Camp Cale, that now include open air cabins, closed air cabins, a pavilion, a conference center, and a snack bar.

WINDSOR – The best head-count. That’s what Bertie County wants in the upcoming 2020 census, and to help insure it... read more