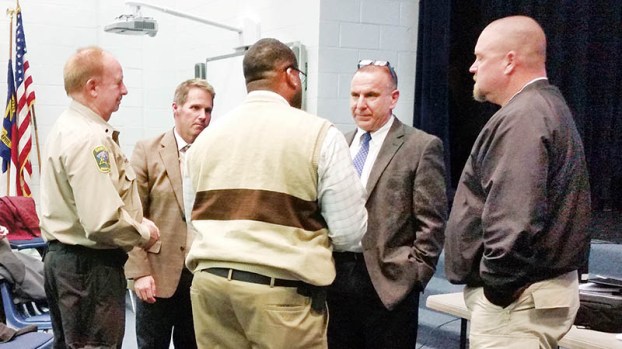 SOS (Save Our Students)

GATESVILLE – Dr. Joseph Erardi began his closing remarks here Friday afternoon by saying, “this is the type of presentation that has no meaning at all if everybody returns to their car and does nothing.”

He spoke these words to emphasize the urgency of making school safety improvements, a topic he spent two hours speaking about at Gates County High School.

Dr. Erardi was invited by Gates County Superintendent Dr. Barry Williams to give his presentation to a mix of school officials, county commissioners, and law enforcement officers. The crowd of almost 100 people came not only from Gates County, but from neighboring counties such as Hertford and Bertie and from as far away as Currituck, Beaufort, and Hyde counties.

The recently retired superintendent of Newtown (Connecticut) Schools shared a variety of information he learned in the aftermath from the Sandy Hook Elementary School shooting which took place in December 2012. Twenty children and six adults died during that tragedy. 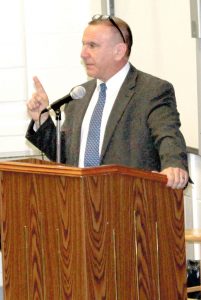 “A lesson is only learned if things change,” said Erardi at the beginning of his presentation to emphasis the importance of action.

Several months after the Sandy Hook tragedy, Dr. Erardi said he held a forum with the survivors where they came up with four ways to improve school safety. These points included making sure all classroom doors were able to be locked from the inside, knowing who is on school campus at all times, using common sense in emergency situations, and running emergency drills.

“In doors that were locked, the perpetrator walked by,” he said, explaining that the majority of the deaths during the massacre—which only lasted for three minutes and 48 seconds—were in an unlocked classroom.

He continued on by explaining how emergency drills had saved 13 lives during the shooting. The principal of Sandy Hook had practiced an evacuation drill just a week before to make sure students knew where to exit and what safe place to reach in case of an emergency. When the shooter’s gun jammed, Erardi explained, 13 students followed the emergency drill just like they had been taught and made it out.

“If you’re going to run emergency drills, put some relevance in them,” he said. “If you had to evacuate, what would you do? Where would you go?”

To any Board of Education and Board of Commissioners members in the room, Dr. Erardi’s main advice was to support their superintendents and remain informed of the school district’s safety plan. He also asked them to not remove budget money away from security and safety measures.

Much of Dr. Erardi’s presentation focused on how vital it is for everyone involved to work together.

“If the school superintendent and the police chief do not get along, there must be some real hard work to change that relationship or somebody should leave. I’m sincere with that,” Erardi said in a serious tone. “There is no plan that will work if those two folks don’t have a partnership.”

The teachers and staff at each school, too, should know the safety procedures inside and out. That includes substitute teachers and any contracted workers.

During his time as the Newtown Superintendent, Erardi said, “nobody ever, ever stood in front of children unless I was absolutely assured that they understood every detail to keep self and those students in their jurisdiction safe. Nobody did not know the plan.”

Mental health support, he said, should also be a factor in keeping schools safe, both before a tragedy and afterwards.

“Always remember, no two recoveries are alike,” he stressed about the importance of making sure each teacher and staff member do not return to work after a tragedy unless they are absolutely ready.

Because much of the national conversation about school safety has been on the question of whether or not to arm teachers, Dr. Erardi shared his thoughts on that subject as well. He does not support allowing teachers to have guns even after taking a training course. He proposed that the only people with guns on campus should be school resource officers or police.

“I believe, and I believe strongly, that there should be an armed officer in every school at every level,” he said.

Dr. Erardi spent the last portion of his presentation speaking on “no cost” or “low cost” safety improvement options. The first of those suggestions was, as he said at the beginning of his lecture, adding any sort of locking mechanism to every door in the school. He also suggested something as simple as numbering each window of the school building.

Another option with “incredibly high yield,” he said, was to have faculty and staff find students to mentor. That would make it easier to reach out to the students who needed help.

Along with making sure the superintendent and police chief meet at least once a month, Dr. Erardi also advised each school to have at least one police officer familiarize themselves with a school inside and out. This is a policy Erardi put in place in his own district while he was there.

“They (the police officers) sat with a custodian, they sat with a building administrator, and they understood every space in that building,” he explained. “If you have that person in place, you’re proactive. If you don’t, you’re reactive.”

Another option he spoke about was “CrisisGo,” a company which focuses on improving emergency communication through mobile phone and computer apps. Dr. Erardi invited CrisisGo cofounder Bill Reynolds to present more information about what the company does.

Reynolds explained that he helped start CrisisGo shortly after the Sandy Hook tragedy. Their app provides a more automated emergency response plan, helps improve communication, provides a rollcall for reunification in case of an evacuation, maps the school, and more.

“We feel that prevention is the key,” Reynolds said.

It was clear from Dr. Erardi’s presentation that there is no simple solution to improving school safety. He challenged everyone to consider the suggestions and think about what they can do to make a difference in the life of a child.

“His presentation was so intriguing, interesting and extremely important,” Dr. Williams said. “I invited him down to Gates County and he said he would be glad to assist in any way. He has dedicated his life to helping schools with safety.”

Hertford County School Superintendent Dr. William Wright was one of the people in attendance during Friday’s presentation, and said he was grateful for the opportunity to hear Dr. Erardi speak. He brought his school district’s maintenance director and student services director along with him to learn more.

“Our district has been proactive in safety,” Dr. Wright said. “We take school safety very seriously. A lot of things we heard today, we’re already doing in Hertford County. But we want to go back and look at some of our procedures. Be more deliberate.”

“Hats off to Dr. Williams, my colleague, for putting this together and opening it up to us,” he continued, and also added appreciation for Dr. Erardi for holding presentations like this even after his retirement.

“It certainly makes us go back and reflect on how we can do it even better,” he said.

WINTON – Hertford County’s Board of Commissioners were updated last week on existing and future road projects in the county.... read more