WINTON – Hertford County’s Board of Commissioners were updated last week on existing and future road projects in the county.

Jerry Jennings, NCDOT Division One Engineer, gave the update to the board during their regularly scheduled meeting.

Ongoing projects include a major one – the long-awaited upgrades to the old NC 11 & 11 intersection. Jennings explained that $15.3 million project got underway in August of last year and is on schedule. 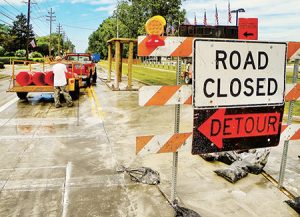 Another project underway in Hertford County is the replacement of a bridge spanning Cutawhiskie Creek on Liverman Mill Road. Jennings said work on that $1.15 million project is expected to wrap up on Nov. 16.

Among the pending projects by NCDOT in Hertford County is the modernization of NC 461 from SR 1403 to Nucor Steel. Jennings said design is currently underway on this $4.1 million project that will widen and strengthen the pavement and widen the shoulders.

Right-of-way acquisition is scheduled to begin in 2020 with work beginning the following year.

“This project will make the road more suitable to handle the truck traffic coming in and out of Nucor,” Jennings noted.

A recently funded project will widen, to three lanes, NC 42 West from the US 13 intersection (near Vidant Roanoke-Chowan Hospital) to the Ahoskie Creek Bridge. The estimated cost is $700,000 and the contract is expected to let later this year.

One of the major future projects in the county will widen, to four lanes, US 13/NC 11 from the US 158/NC 45 intersection at Winton to the NC 11/NC 561 intersection (near the Ahoskie Inn).

Jennings said this $60.4 million project is currently in the design phase. Right-of-way acquisition (to include some areas where the road will be built on a new location) is expected in 2023 with construction beginning two years later.

“There may be an opportunity to accelerate the start-up of this project, that’s why the design is now being done,” Jennings noted.

Another major four-lane project is on the horizon in Ahoskie. There, Memorial Drive (US 13) will be widened to four lanes from Academy Street (at the hospital intersection) to where the four lanes now begin (Peachtree Street, at Central Ford). This project, estimated at nearly $12 million, will include replacing the bridge now spanning the railroad tracks. Right-of-way work is now scheduled for 2023 with construction beginning in 2025, pending funding.

Jennings updated the commissioners about a request sent last year by the Hertford County leaders regarding the transformation of the current Murfreesboro Bypass to a superstreet design, just like the other part of that four lane from the US 158 Business intersection to Winton.

“We’re looking at all the existing intersections now on the Murfreesboro Bypass,” Jennings said. “Based on current traffic volumes and safety issues, we want to move forward with this project. From talking with our (DOT) folks in Raleigh, we feel like we could fund this project with safety funds and not have to go through the TIP (Transportation Improvement Project) to get this done.”

To clarify the project, Jennings said the existing three stoplights on the Murfreesboro Bypass (to include the NC 11 and US 158/US 258 intersections) would be removed.

The commissioners also requested last year for the speed limit on the four-lanes of US 158 from Winton to Murfreesboro to increase to 60 mph.

Jennings said that request is currently being processed, but only for the section of US 158 from Winton to the start of the eastern end of the Bypass. He added that once the safety features on the Bypass are complete, the speed limit there will increase to 60 mph (to the US 158/US 258 intersection: the western end of the Bypass).

“We ask for your consideration on our proposals for the Murfreesboro Bypass,” Jennings told the board. “If you feel like you need more information, we can develop a preliminary design and bring that back to you, but that will delay the application for safety funds to pay for this project.”

As for highway maintenance projects in Hertford County, Jennings said a five-year plan (route specific) has been developed – $2.03 million to preserve (sealing cracks, etc.) 101 miles of roads; and $13.8 million for resurfacing 104 miles.

Another part of NCDOT’s plan includes what Jennings referenced as “non-pavement assets.” He stressed that is a two-year plan, focusing on road shoulder and ditch maintenance, drainage pipe replacements, and pavement markings. He said NCDOT will invest over $1 million this year for those types of planned projects in Hertford County.

WINTON – Three options, ranging in size and price, are now on the drawing board for the proposed new Ahoskie... read more