AHOSKIE – Gage Riddick’s three-run homer in the top of the sixth inning broke a 4-4 tie and propelled Gates County to a 7-6 win over Hertford County here Saturday evening giving the Red Barons the season sweep.

The ‘Barons opened with a pair in the top of the first when Ron Olsen reached on an error, went to third on Trent Hobbs’ base hit and scored on a sacrifice fly by Brett Walsh. Riddick reached on an error as Walsh was forced at second. Riddick then scored when Jimmy Mento reached on another Bears’ miscue. 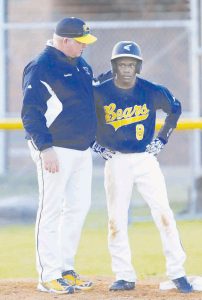 Hertford County baseball coach Chris Towell (left) talks strategy with Tyrek Beverly at third base during an earlier game. The Bears managed 10 hits against Gates County on Saturday, but lost a heartbreaker 7-6 on a late home run. | William Anthony Photography

Hertford County went ahead in the bottom of the fourth when Evan Lassiter singled, then went to second on a wild pickoff throw.  He then scored the Bears’ first run on Trevor Lee’s RBI double. The Bears then loaded the bases and Lee scored the tying run on Cameron Lassiter’s groundout, as Munford scored the go-ahead run on an error on the same play.  Hertford County led 3-2 after four.

Gates went back in front in the top of the fifth. Walsh tripled off the left field fence and scored when Gage Riddick reached on a two-base error. Gage Riddick then scored on Hayden Riddick’s RBI single to right for a 4-3 Red Barons lead after four-and-a-half innings of baseball.

The Bears got the equalizer in the bottom of the frame when Tyrek Beverly and Alden Lassiter opened with back-to-back base hits. Alden Lassiter was out at second on the force-out on the next at-bat when Evan Lassiter reached on a fielder’s choice. Lee then reached on an error allowing Beverly to score the tying run.  The Bears would eventually load the bases, but the ducks-on-the-pond were stranded when the inning ended with a groundout and it remained knotted at 4-4.

Gates opened the sixth with a Chase Evans single followed by a base-on-balls issued to Walsh. Gage Riddick then smacked the first pitch he saw to the deepest part of the ball park in centerfield for a three-run blast and a 7-4 Gates County lead.

In the bottom of the sixth Hertford County mounted a comeback. Jaylan White singled to open the inning and went to third on Beverly’s safety to left field. Beverly then stole second for two Bear runners in scoring position. Alden Lassiter then dribbled an offering through the infield scoring White, and Beverly came home on Evan Lassiter’s RBI single to right field.  The Bears had pulled within a run at 7-6, but the rally died when Alden Lassiter was thrown out at third base on Lee’s deep fly-ball to centerfield. It was 7-6 after six.

The Red Barons then shot down the Bears last chance getting the side out in order in the bottom of the seventh.

Gates County had 11 hits: two each by Gage Riddick Olsen, Walsh and Rick Neathery.  Hobbs, Evans, and Hayden Riddick had the other hits for the ‘Barons.

Hertford County put up 10 hits, three by Evan Lassiter. Alden Lassiter and Beverly had two hits apiece, while Lee, Munford, and White had one hit each.

Hunter Mitchell went three innings for Gates County, with relief help from Hobbs and Neathery, who was credited with the win.  Lee went six innings for the Bears and was tagged with the loss while Kole Liverman came on in the seventh.

Gates raises its record to 3-1 while the Bears (0-3) are still seeking their first win. The rest of this week Hertford County will be at North Pitt today (Tue.), home to Roanoke Rapids on Wednesday at 7 p.m., and at Southwest Edgecombe Thursday at 5.

WASHINGTON – Ridgecroft School opened their 2018 softball season by picking up a pair of Tarheel Independent Conference victories.  The... read more