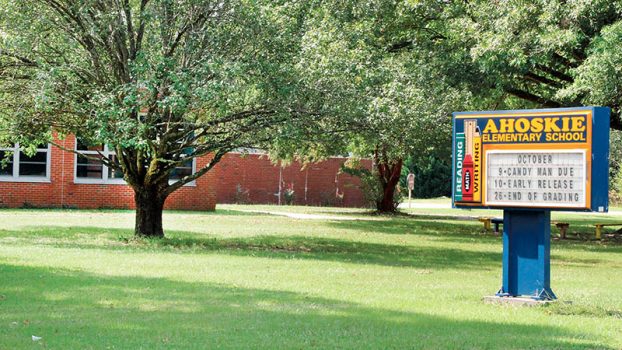 WINTON – Three options, ranging in size and price, are now on the drawing board for the proposed new Ahoskie Elementary School.

Those plans were formally unveiled here Monday morning during the regularly scheduled meeting of the Hertford County Board of Commissioners. Thomas Hughes of the Raleigh-based architectural firm SFL +A presented each option in detail. His firm is under contract with Hertford County Public Schools to provide architectural design and services to the proposed project. 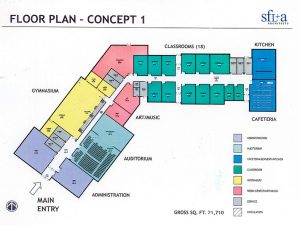 While it appears that the commissioners and county manager are all in agreement that a new elementary school is needed in Ahoskie to replace the current one, built in 1959, the sticking point in the ongoing negotiations is whether or not to include a 465-seat auditorium in the plans.

Dr. William Wright, Superintendent of Hertford County Public Schools, and David Shields, Chairman of the Hertford County Board of Education, each expressed their desire to see the auditorium included. However, its inclusion in the project blueprints adds roughly $1.2 million to the overall cost.

“At the end of the day, we want to do what Hertford County’s motto suggests, to build for the future for our students and our citizens,” Dr. Wright stated. “We believe the best way to do that is to build a new, state-of-the-art Ahoskie Elementary School, one that will last and change the way education is thought of for 50-plus years to come.”

“The reason we’re pushing for an auditorium is there is nowhere in Hertford County to have a meeting that can accommodate 400-plus people,” Shields noted. “I’m passionate over including the auditorium.”

In his presentation, Hughes went over each of the three options. They range in price from $13.88 million to $16.82 million.

Concept (option) 1 calls for a 500-student capacity school (600 core capacity, which takes into consideration the multi-purpose areas – gym, media center, cafeteria – to be a bit larger in design to accommodate possible future growth in student population) with 18 classrooms, a gym (complete with bleachers and locker rooms), and the auditorium. This 71,710 square foot proposal has an estimated price tag of $16,842,392. 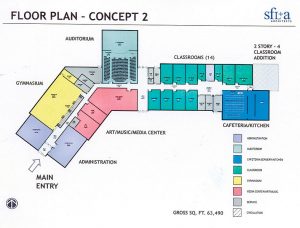 Hughes noted that in all three options, the area of the school designated as classroom space will be two stories, while all remaining areas are single story. He noted that was necessary due to the small size of the campus – approximately 12 acres, which is already owned by the county.

“With fifth graders (whose classrooms will be on the upper floor), we felt they were large enough and old enough to safely access and exit the second story,” Wright noted. “We do that anyway with all the schools after that; our middle school and high school have classrooms on two stories.”

All three options also include a safety feature – a single point of entry.

“Once the students arrive, a second set of interior doors are locked, meaning anyone then entering the building must first come through the main office where they are checked in before being allowed to enter the main part of the school,” Hughes stressed.

Should the school system allow the public use of the gym and/or auditorium for non-school related events during nights or weekends, the reminder of the facility could be cordoned off. 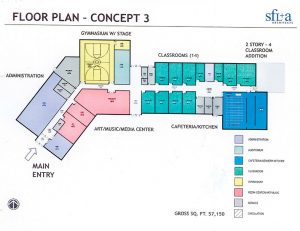 “This schedule has a little float in it, but not much, right now; we really need to move ahead,” Hughes stressed to the commissioners.

Farmer inquired of Dr. Wright the number of classrooms now in use at the current school. The answer was 20 (14 regular and six core area rooms), serving 310 students.

“Have the number (of students) been increasing over the last couple of years,” asked Commissioner Bill Mitchell.

“Since I’ve been here (a little over two years) they’ve been holding pretty constant,” Wright answered. “We have recently added some students who transferred back into our district from the charter school over in Bertie (County).”

Mitchell also inquired of the functionality of the gym (with a stage) compared to an auditorium.

“An auditorium is a dedicated facility, used for plays, presentations, and the like,” Hughes answered. “The real challenge in an academic setting is using it for something other than plays and presentations. You can use it as a lecture area….we can place tablet arms on the first 10 rows (of seats). You can bring classes together for lectures. The commitment is to use it effectively.

“The gym, or gymtorium with a stage, does not lend itself for the arts; it’s more of a gymnasium,” Hughes continued. “In an auditorium, you have a raised floor so you can see over the head of the person sitting in front of you. In a gymtorium, everyone sits flat, and you’re also putting a lot of people on your gym floor, which causes wear and tear.

“The auditorium can be a revenue generator for the school system, you can rent it out for public functions,” added Hughes.

“This is what I wanted to see – more than one option that we can study,” said Commission Chairman Curtis Freeman. “We will look over the options. When we make a decision on which option we will proceed with we can justify it with our citizens.”

As noted back in January when Hughes unveiled the preliminary architectural drawings (a single option at that point) during a school board meeting, the new school will be constructed on the opposite side of First Street from the current Ahoskie Elementary campus.

The school’s main entrance will be on First Street (NC 561), adjacent to the Town of Ahoskie Cemetery. Faculty/staff and bus entrances to the school will be off Ruth Avenue.

The outdoor playground area will be shared with Bearfield Primary School.

Conversations began seriously in 2011 to move forward to build a new Ahoskie Elementary School. The estimated cost at that time was $12.2 million.