WINDSOR – After waiting a chilly five days thanks to a Friday postponement, Bertie High’s baseball team was anxious to heat up their bats.

Monday the Falcons’ aluminum sticks were smoking as they pounded out 10 runs on nine hits for their first win of the year, 10-2, over Roanoke Rapids. 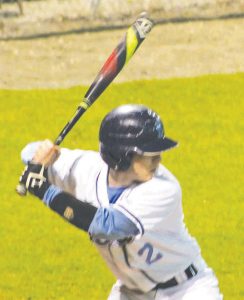 Jared Speight had one of Bertie’s nine hits as the Falcons pounded Roanoke Rapids 10-2 Monday for their first win of the 2018 high school baseball season. | Staff Photo / Gene Motley

Alden Cottle went 2-for-3, scored three runs, and picked up the win on the hill, tossing a six-hitter with six strikeouts. Trenton White and Jarrett Burden came on in relief. Catcher Scoop Hoggard celebrated his return to the lineup by driving in a run.

“I thought Scoop and Alden were fantastic,” said Falcons coach Bobby Harmon after the game.  “With Scoop’s defense behind the plate, he makes any pitcher comfortable.  Alden did a great job of locating the fastball and mixing in off-speed pitches.  I thought he did a good job of executing to get out of a couple of jams.”

Bertie opened with three runs in the bottom of the first as White singled, stole both second and third base, and scored on Cottle’s one-out base hit up the middle.  Caleb Damo then doubled to right, sending Cottle to third where he would score on Hoggard’s sacrifice fly.  Damo plated the third run of the inning when Zack Castelloe singled.  It was 3-0 Falcons after one complete inning of baseball.

Bertie got two more runs in the bottom of the second when Jared Speight singled to right field, and then later scored on a triple by Cottle. Damo would later bring home Cottle with a single through the hole at shortstop.  Bertie held a 5-0 lead.

Roanoke Rapids got their only two runs in the top of the fifth on a pair of hits that Cottle surrendered.

Bertie got its final three runs in the bottom of the sixth: a two-out unearned run by Jared Speight and a two-RBI single by Burden.

“Offensively, we swung the bats a lot better than the first game and played much better defense,” Harmon added. “I was very proud of the whole team as everyone had a hand in this victory.”

Bertie hosted Edenton Holmes Tuesday before closing out the four-game home stand with a game against North Pitt today (Thur.) at 5 p.m.

AHOSKIE – Perquimans County broke open a tight one-run game with a pair of runs in the top of the... read more