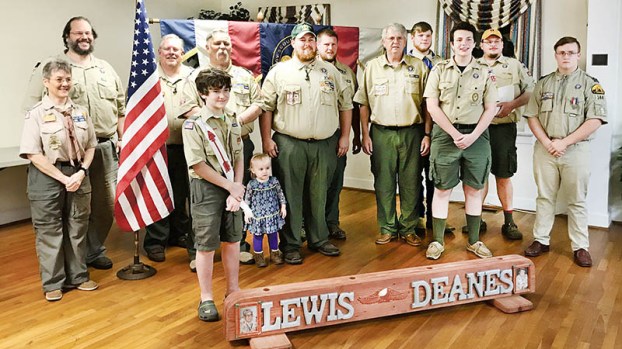 Shown here are the leaders of the local Lewis-Deanes District of Boy Scouts of America at their annual awards dinner held Feb. 24 in Jackson.

Troop 129 posted the colors and led the audience in the Pledge of Allegiance and an invocation. Dinner was held with Roanoke Rapids Police Chief Chuck Hasty as the keynote speaker. Hasty let the Scout Leaders know how important their role in developing young Scouts into contributing citizens.

“We are proud of all the award winners. These leaders are making the difference for hundreds of Scouts across the District and that is what Scouting is all about. Scouting offers Scouts of all ages the opportunity to learn to make a difference in the communities in which we reside.” Said Allen Purser, District Chair.

East Carolina Council serves over 7,000 youth. Lewis-Deanes District composed of Halifax, Northampton, Hertford and Bertie counties serves 298 youth. Twelve percent of registered Boy Scouts in Lewis- Deanes District received their Eagle rank in 2017, which is more than double the national average. Youth in the local program conducted over 3,000 hours of community service in 2017

NEW HOPE, PA – Quilt Artist Jan Thomas of Murfreesboro has been accepted as a finalist in the 2018 Imagine... read more