McGlone, who passed away at his home in Lewiston on Sunday, was fondly remembered by family, friends, colleagues, and others on Monday as word spread of his death.

“On behalf of the Bertie County Schools Board of Education and Superintendent (Catherine) Edmonds, it saddens me to report that we have lost one of our own. Long- time educator and School Board member Barry McGlone has passed away suddenly at his home,” said BCS Board of Education Chair Bobby Occena in a statement.

“He brought a lot of good perspective to the board,” Occena continued. “His experience as a manager helped a whole lot in looking at the situation with Bertie County Schools. He cared a lot about the kids and the staff. He was in charge of many extra-curricular activities having been in athletics. He taught my kids, and I taught his kids. We went a long way back, and I knew his family very well.” 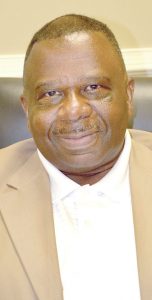 McGlone was vice-chair of the school board. He had been a board member for three years, having been elected in 2014.

“He was dedicated to giving the best for the students of Bertie,” Occena added. “He understood that his service as an elected official ultimately affected the lives of the community at large, and we will forever be grateful for his contributions in our schools and communities.”

A 1972 graduate of Bertie High School, McGlone received a football scholarship to then-CIAA member school Norfolk State but never played for the Spartans after suffering a career-ending knee injury. He did go on to graduate from the school in 1976.

In addition to his years in education, McGlone went on to become a manager at the Anhauser-Busch brewery in Williamsburg, VA, and held a position with the company for over 30 years before finally retiring. Often he would work and coach during the week, commuting to Virginia on weekends.

At Bertie High, McGlone was a driver’s education instructor and began his coaching career as an assistant to Bing Mitchell in the late seventies. McGlone rose to offensive coordinator and was part of two Falcon state championship teams before retiring from coaching in 2002. During his final years he was Bertie’s athletic director, a position he shared for a time with then-coach Marvin Rankins. McGlone returned to coaching briefly as a volunteer assistant under Renaldo Windham at Bertie Middle School and he coached until officially retiring in the early 2000’s.

“He was a good friend, mentor, and confidant,” said former Bertie baseball coach and athletic director Randy Whitaker. “We coached together for around 15 years and we had a lot of great times coaching together. Even though he had retired, we would still see him at Bertie athletic events.”

“Just an excellent man, straight up,” said former Bertie assistant principal and County Commissioner Norman Cherry. “He had a great relationship with the kids; so much so that when he had a chance to get back on the sidelines (with Bertie Middle), he jumped at it. He was like my little brother.”

“With the experience that he had, he just did a great job of both instructing us on what he wanted us to do as coaches in setting the offense and the defense, and of preparing the kids,” said John Richardson, another former educator and colleague.

Though her tenure with BCS has been brief, since Dec. 2017, Edmonds praised McGlone as an educator and School Board member.

“In the short time that I knew him, he exhibited a vested and genuine care for the students in Bertie County. I know that his contributions as a board member and community member will be missed. My deepest sympathy goes out to his family and friends,” Edmonds concluded.

Funeral services for McGlone, a member of Mt. Olive Missionary Baptist Church in Lewiston, were incomplete as of Monday afternoon.

WINDSOR – Flashing a smile as wide as the Chowan River and a heart as warm as a summer night,... read more