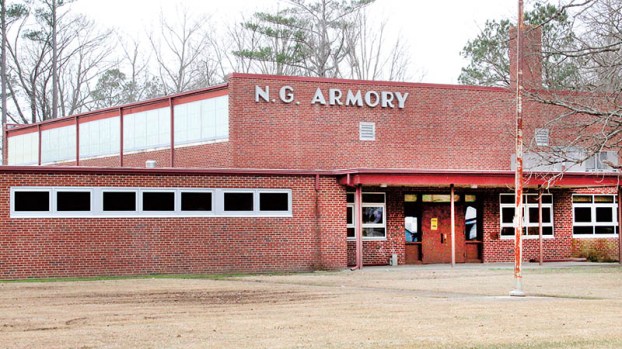 For several decades, the armory building at 307 Cherry Street in Woodland hosted members of the local National Guard regiment. The building remained in use by the National Guard until September 2017. | Staff Photos by Holly Taylor

Handing over the keys

WOODLAND – A building with decades worth of history sits quietly at the end of Cherry Street in Woodland. The National Guard Armory served the town of Woodland and the surrounding communities from 1961 to 2017.

Now the property has been transferred back into the hands of the town. An informal ceremony was held on February 28 to celebrate the occasion.

“Here we are some 60 years later,” said Woodland Mayor Kenneth Manuel, all smiles as he greeted the crowd gathered in the large open room inside the armory building. “The purpose of this brief ceremony is just to signify the transition of ownership from the National Guard of North Carolina to the Town of Woodland.”

The mayor expressed his gratitude towards the National Guard for what they’ve done to help during the changeover. He explained that most armories are returned “as is,” but they’ve worked out an agreement where the National Guard will take care of some minor building maintenance issues. The National Guard has also agreed to allow the town to keep the equipment in the facility’s weight room as well as a lawnmower used for groundskeeping. 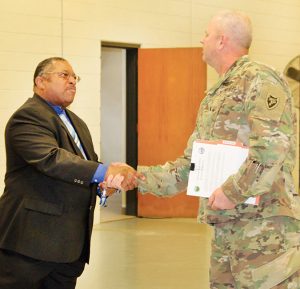 Woodland Mayor Kenneth Manuel, left, shakes hands with Lt. Col. Rodney Newton after the keys to the armory building were turned back over to the town during an informal ceremony held on February 28.

“They have been really special in terms of going the extra yard,” Manuel said, praising the Guard members for their help.

Lt. Col. Newton spent a few minutes explaining what the National Guard’s plan was and why they were turning the building back over to the town. The transfer is part of the Readiness Center Transformation Master Plan (RCTMP), a program which is restructuring and consolidating the National Guard all over the country.

“The requirements for space for soldiers is more than it used to be,” Lt. Col. Newton added as one of the reasons why they weren’t using the 14,300 square foot building anymore.

Despite the changes, however, the Lt. Col. assured them the National Guard was still out in the communities to provide assistance and other duties whenever necessary.

Michael Eason, a retired US Army Sgt. who joined Woodland’s National Guard in 1974, said he had a lot of good memories from the armory building.

“We supported this town in many ways and the town supported us,” Eason said. “I still have friends today that I recruited in here.”

Traveling from his home in Maryland to witness the Wednesday morning ceremony, Eason spoke afterwards about a few of his memories with the National Guard in Woodland. He said he started off as one of the lowest ranked members of the regiment, so he got stuck with the dirty work like cleaning the bathrooms and peeling potatoes.

“One day, they gave me a key to a jeep. They said go recruit. I recruited 25 people,” he continued with a laugh, explaining that got him a promotion so he didn’t have to peel potatoes anymore.

Eason also spoke highly of Doug Flythe, the man who was responsible for starting Eason’s whole military career. The building bears Flythe’s name in honor of his service.

“He made me go to school,” Eason said of Flythe’s encouragement to continue his military training. “When the time came, I was the only one qualified to get promoted. Back then I didn’t see it at first, but afterwards, it made me what I am today.”

Now that the keys are back in Mayor Manuel’s hands, the town’s next step will be to decide what to do with the five-acre property.

Manuel said that the town commissioners will soon set a date for a public hearing so that everyone has the opportunity to voice their ideas. Some suggestions already include using the space as a rental hall or a library, while other plans may involve selling the property and using the revenue for other town needs.

“We always take our time and try to look at all of the different angles before we make a decision on any particular item,” Manuel said, but added he was excited by the building’s potential.

The brick building on Cherry Street served its purpose for the National Guard for many decades, but now it’s up to the residents of Woodland to figure out what the building’s next purpose will be.