AHOSKIE – Kyeem Perry has never lacked confidence. Not with the PeeWee Rec. League Bobcats, in middle school, nor at Hertford County High, and now – he hopes – not with Chowan University.

Friday, Perry signed a grant-in-aid to attend the Murfreesboro-based CIAA school, meaning if he makes the team he’ll be playing before people who’ve watched him mature as an athlete, a student, and as a young man.

He was someone who spoke best through his play on the gridiron; Perry is a man of few words. In making his choice, Perry spurned Elizabeth City State, St. Augustine’s, and St. Andrew’s Presbyterian –three other schools who offered and showed interest in signing him. In the end, the Ahoskie native – a young man with strong family ties – thought it best if he remained close to home.

“I can come home anytime I want to, to be with my family,” he noted. “I’m safe around here, and I don’t figure to get into trouble.”

Perry didn’t just break the Bears’ record book, he set out to destroy it; setting a new school record, and finishing his four-year career with a total of 5,265 yards and 51 touchdowns, all on the ground. Perry, with 2,045 rushing yards in 2017, broke Keith Roberson’s 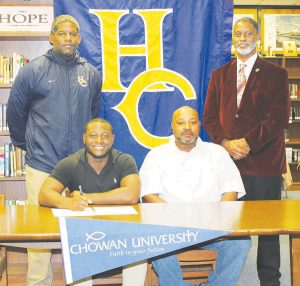 1988 school record of over 2,000 yards, though local statisticians and sports historians have not been able to agree on an exact number.

“I’m all around,” he confesses. “I think basically I’m a pure athlete; and I don’t lack confidence, not at all. Nothing will change.”

“It’ll give (local fans) some football Wednesday through Sunday,” said Saxby. “We (high schools) will give you something on Friday nights, and he can give them something on Saturday afternoons.”

Saxby said despite the CU connection, he never tried to steer his star runner toward his former school.

“I’ve been through those walls,” Saxby said. “I’ve been in those classrooms and to know that somebody gets the same opportunity that I had is great; not only great for me, but great for Chowan that a local player is staying in the area.”

“I’d like to be a trainer, or maybe a coach,” he affirmed.

Perry wants to raise his high school GPA so that he’ll be eligible right away. If not, he knows there’s plenty of work to be done.

“Sure, I want to play right away,” he acknowledged. “I know it’s going to be tough, but I’ll just fight through it; I’m used to that. If I can’t play right away I’ll keep working out to get bigger, faster and stronger so I can compete.”

Perry knows quite a few former Hertford County schoolmates who are athletes and non-athletes at Chowan, which adds to the familiarity. There is anticipation in his voice over a new chapter in his life.

“I can’t wait, really,” he admitted. “The whole experience and a chance to be on my own will allow me to (do for myself).”

Perry has the NFL in his future, but knows it’s not only afar off, but means a lot of sacrifice.

“I want it bad,” he said. “It’s my dream. But first I have to do well on the field and do well in class. If I try my best I think I can get there.”