RALEIGH – The number of awards won by the Roanoke-Chowan News-Herald keeps growing.

On Thursday of last week, the North Carolina Press Association announced the winners of the 2017 Advertising, News, Editorial and Photojournalism Contest during its annual meeting and Winter Institute held in Raleigh. There, the advertising and news departments of the Roanoke-Chowan News-Herald earned a total of five awards.

“What makes this type of recognition even more worthwhile is that these awards are bestowed by our peers in journalism and advertising who are members of press associations in other states,” said News-Herald publisher Tony Clark. “They apparently know what the readers of the Roanoke-Chowan News-Herald have come to expect – having an award-winning publication in their hands.” 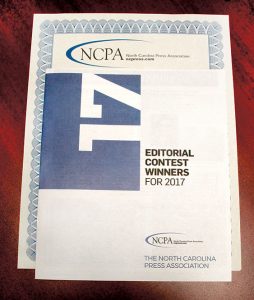 R-C News-Herald Staff Writer Gene Motley earned the highest honor in the category of City-County Government Reporting. Motley’s three-part series on the financial difficulties experienced last year by the Bertie County Public School system, and its plan to fix those problems, was judged as the first-place entry in the NCPA contest.

Motley was also a first place winner in the prior year’s (2016) NCPA contest for his work in serious columns.

On the advertising side of the 2017 judging, R-C News-Herald ad designers Ryan Outlaw and Crystal Parker combined to win four awards.

Parker’s work on an ad placed by Community of Hope Funeral Home earned her a second place award in the category of Best Institutional Ad.

“I congratulate Gene, Crystal and Ryan for their outstanding work. I am so proud of the good work done by our talented and hard-working staff, and am thrilled to see them recognized for their efforts,” said Clark.

Only three winners are named in each category within each newspaper division. There were over 10,000 combined entries sent in from NCPA members statewide.

The Roanoke-Chowan News-Herald is no stranger to winning awards from the NCPA. Last year, the RCNH news and ad staff combined to earn 11 awards, the highest total ever won by this newspaper in a single year. Four of those winning entries were judged in first place.

AHOSKIE – Through the US Dept. of Agriculture (USDA) Rural Development the town is seeking loan funds which would be... read more