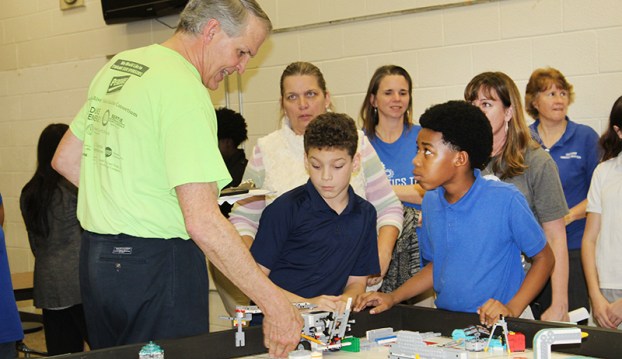 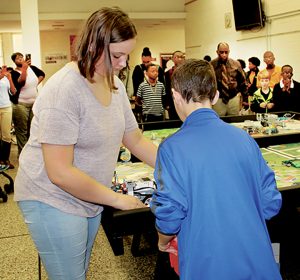 “The Roboticians” of Willis Hare Elementary get their robot ready to complete a series of missions they designed it to carry out. Staff Photo by Holly Taylor

The FLL competition gives students a chance to create and design a robot to carry out “missions” which simulate real world issues. Additionally, they have to complete a research project and develop solutions to the challenge, before presenting their findings to the judges.

The scrimmage, which was hosted by Hertford County Middle School for the first time, gave the students an opportunity to familiarize themselves with what happens during a real competition. Each group took turns during the first part of the scrimmage stepping into separate classrooms to present to the judges their project, their robot, and their Core Values, another important aspect of the competition.

“I really like the Core Values because that allows them the opportunity to talk about working together, things that they encountered, the obstacles that they faced, how they overcame those obstacles as a team,” said Pam Baker, Hertford County Middle School’s AIG coordinator who also serves as the FLL event facilitator.

Hertford County Superintendent Dr. William Wright explained that the school had participated in the robotics competition in the past as a part of the Roanoke River Valley Educational Consortium, but after a break for a few years, they decided to join in again.

“It’s good healthy competition, and it gives our kids exposure to be able to practice project-based learning,” Dr. Wright said. “So why not get back in it?”

There are up to 10 students allowed per team, and each school can have more than one team if necessary. Baker explained that many participants were AIG students, but the opportunity was open to any student interested.

“Some of these students are students that may have had trouble in the classroom and needed hands-on types of activities, or they were interested in robotic design or coding,” she said. 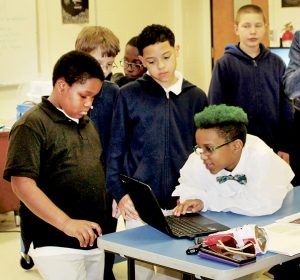 During the Project presentation portion of the competition, the “Blazing Bears” of scrimmage host Hertford County Middle School talk about the research they did to solve a real world challenge concerning hydrodynamics. Staff Photo by Holly Taylor

The second half of the scrimmage was when the students got to show what their robots could actually do. Two tabletops were set up with different Lego “missions” to complete. The theme was hydrodynamics, so their customized robots had to carry out specific water-related tasks. Because this was simply a scrimmage, the judges were able to give the students advice and pointers while the mission challenge was happening. This information will be important for the students to remember when they attend the actual competition in March at Halifax Community College.

Parents were invited to witness the scrimmage and many came out to see the results of their children’s hard work. Hertford County Board of Education members Sheila Porter and J. Wendell Hall also attended to see what the students had been working on.

“It’s very exciting. Robotics are always fascinating,” Porter said. “We support them any way we can.”

Hall echoed similar sentiments about supporting the students, adding that he was proud to see their work come alive.

“One of these kids might end up creating something with artificial intelligence in this day and time,” he said. “We might see [this] today as a contest or something that kids can just have fun with. But in reality, this is what the future’s going to be for them.”

Dr. Wright too sat down alongside the parents to watch the students participating in the scrimmage.

“I’m excited to see what our kids can do. We know that they can do what anybody else can do,” the superintendent said. “This is just an opportunity to show it.”

The FLL scrimmage not only gave the students a good chance to learn about the interesting subject of robotics in a hands-on way, but it also allowed them to interact with other students studying the same topics.

“It’s always healthy when you can see other people and interact with them, and they’re from neighboring schools. Not just on the basketball court or the football field,” Dr. Wright explained. “Having an opportunity academically to compete, but also to network with each other. The earlier you can start that, the better off it is.”

MURFREESBORO – Chowan University’s new president didn’t have to use an electronic navigational device to find his way to the... read more