GATESVILLE – A Murfreesboro man with a long criminal history is being held without bond in a Jan. 14 homicide that took place at a clubhouse in Gates County.

Japree Lortez Brooks, 34, stands charged with first degree murder, according to Interim Gates County Sheriff Robert Jordan. Brooks is accused of fatally shooting 30 year-old Julius Lorenzo Fennell, Jr. of Ahoskie. He is also charged with attempted murder as a second victim was shot at the same clubhouse on the same date.

Brooks was arrested recently in Norfolk, VA and is currently being held without bond.

He was also served a warrant for attempted murder in an unrelated case in Hertford County. Sheriff Dexter 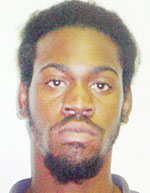 Hayes of Hertford County said that case involved Brooks allegedly shooting at a female acquaintance last summer, but since that time the woman recanted her story about the shooting.

“We had developed Mr. Brooks as a person of interest in our murder case here in Gates County,” said Jordan. “Once we were able to develop more information through our investigation, we were able to draw arrest warrants on Mr. Brooks for first degree murder.

“While we feel certain that we have our man, we are still actively investigating this case; anyone with information they want to share can call the Gates County Sheriff’s Office at 252-357-0210 or the North Carolina SBI at 252-756-4755,” Jordan said.

Fennell died of a gunshot wound later on Jan. 14 after being transported to Vidant Medical Center in Greenville.

Fennell was reportedly taken by private vehicle to Vidant Roanoke-Chowan Hospital in Ahoskie before being transferred to Greenville.

The second victim, Dontrell Dukes of Hertford County, was shot in the leg. He was treated and released from Vidant Roanoke-Chowan Hospital.

The shootings occurred at around 2 a.m. on Jan. 14 at a building owned by Nexx 2 Nunn, a local non-profit club located at the intersection of US 13 and Gatlington Road. The club had rented the building on that date to a group for a birthday party.

Brooks is not a stranger to local law enforcement. He was among six individuals charged in a crime spree from late 2010 until early 2011 that involved at least 20 burglaries and five cases of arson. Charges from that crime spree – which involved the theft of shotguns, rifles, pistols, TV’s, computers, cell phones, DVD/CD players, jewelry, rods-and-reels, fishing tackle boxes, printers, cell phones, an ATV (All Terrain Vehicle) and silver coins and bars – were lodged by the Sheriff’s Offices in Hertford, Bertie and Northampton counties as well as Southampton County, VA.

The charges included arson, including one case in Bertie County where the historic Harrington Clubhouse near Lewiston-Woodville was purposely torched after a break-in; and a residence near Boykins, VA in Southampton County.

MURFREESBORO – By recommendation of the town’s fire department, the Murfreesboro Town Council approved a new fire chief at their... read more