AHOSKIE – When Currituck County’s girl’s basketball team turns up its defense, it pays big rewards for the Lady Knights. It’s something their coach, Matt Dixon, has preached all season.

No reward for CCHS was bigger than Friday evening when the third-seed knocked off number-one Bertie in shockingly easy fashion 47-39. That was a score good enough to give the Knights the Northeastern Coastal Conference tournament championship.

“Discipline, defense, and focus,” a jubilant Dixon said after the game. “We knew they (Bertie) were good; we’d played them twice already.” 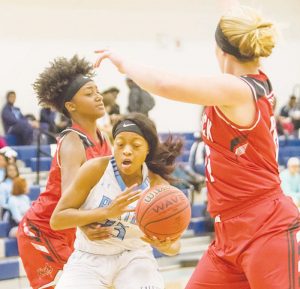 “No energy from us,” said Bertie coach Kelvin Hayes, shaking his head. “They (Currituck) just played together; nothing fancy or flashy, just good enough to win.”

Morgan Mazyck tipped in a missed shot early and Bertie tied the game in the opening minutes, 2-2. It would be as close as the Lady Falcons would come for the rest of the evening.

Neither team was shooting particularly well, but the Knights’ defense on Bertie, especially in the low-post, was superb. Currituck then reeled off eight straight, two buckets from Isis Saunders, who had missed the second Bertie game. This forced Hayes to call time out, but the Falcons still couldn’t score. Tyana Peebles then nailed a triple for Currituck and after one quarter of play the Falcons had just two points and trailed, 11-2.

After a free throw, followed by a three-pointer from Dawaunti Combs, Bertie was only down five, 11-6. But the Falcons’ scoring woes continued. With no inside game, and their outside shots not falling, Currituck went on an 11-2 run to get the score up to 22-8. Adding to Bertie’s woes was their inability to convert from the free-throw line where they were an anemic 3-of-13. Mazyck finally drained a pair at the line and Bertie headed to the locker room down 22-10 at the mid-break.

With Bertie’s fans nervously squirming in their seats, the Falcon faithful were anticipating a second half offensive explosion. Instead, Currituck scored six of the first eight points of the quarter for a 28-12 lead. Nyasia Barnes then helped wake-up the Bertie offense. The senior guard scored seven of Bertie’s next eight points, forcing Dixon to call time-out and re-group his team’s defense. Akyia King then made a short jump shot, and Bertie had trimmed their deficit down to eight, 30-22. It was that same margin at the end of the quarter when King let sail a successful three-point shot, and the quarter ended with Currituck in front 34-26.

In the fourth quarter, until the final minutes, it was all King and Barnes trying to hold the Bertie ship afloat. Meanwhile, Currituck made just one score from the floor: a field goal by Trinity Evans that was part of a 6-to-2 Knights run that staked the ladies in red to a 40-29 lead. Lauren Gerni made a pair of foul shots to post Currituck to an 11-point lead 42-31 before Hayes called another time-out with 3:02 remaining. Barnes connected on a triple and Combs followed with a lay-up to get Bertie within six, 42-36, and suddenly the Currituck side got quiet. Two possessions later, Combs fouled out with 1:49 remaining. From there, Bertie fouled Gerni on every Currituck possession, but the Lady Knights’ top foul shooter converted 3-of-4 for a 10-point lead, 47-37. The only scoring before the final buzzer was a late King jump shot, her only points of the frame. Suddenly, the team that had always denied the Knights a championship had been slain as the Currituck bench erupted in jubilation.

“This means the world to these girls,” said Dixon. “My seniors have waited four years for this and beating Bertie to do it is special for them.”

Currituck (14-10) had to defeat Pasquotank to make the NCC final; they’ll get to see the Panthers again as a first-round opponent in the 2A state playoffs. Bertie (16-8) meanwhile, goes in as a sixth-seed and will begin their playoff play on Tuesday as well, hosting Goldsboro.